This past weekend, a colleague at our studio opened a show of his latest work.  It was fabulous.  (And can be seen at his web-site www.thorsten-knebel.de.  I haven't taken the liberty of posting any here.)  We also opened our studio doors to the public, and in spite of cold, rainy, November-like weather, we had a pretty good turnout.  It was good to meet with people and get feedback on my paintings - something that I need, and I think most people who paint or write need, after working in isolation on projects.  The weekend was also a chance to challenge and stretch my remarkably poor German.  I felt like I could have slept for a week afterward.

But today I was back in the studio feeling encouraged and energetic.  I was also feeling a little bolder about showing my work so I'm using this opportunity to show a few of the pieces that I've been working on, and a bit of my studio space  (I love, love, love peeking into other people's work spaces.) 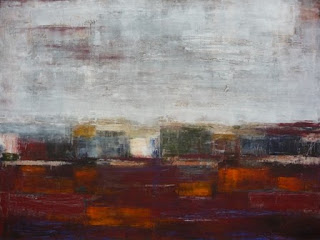 This one above and the one below were painted in the months after my trip last November to Dartmoor.  I wanted to try to capture the haunting, eerie, nebulous nature of the landscape. 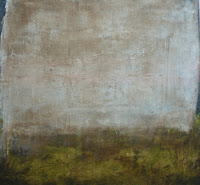 This red one is actually an old one, but I've been looking at it again with the idea of carrying on with the technique, but applying new themes to it.  This one was inspired by the bark of trees and the leather of old books. 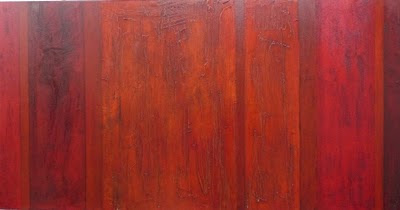 This new one, still in progress and sitting on my easel, is inspired by the Norse myth of Yggdrasil and the three Norns who spend their days spinning the fates of men and gods under the tree, and who water its roots from the spring Uroarbrunnr.  Some of the paintings on the wall in the background were made by my younger son, Rowan, who spent Sunday at the studio with me, and was so inspired by all that was going on, he decided to make a few of his own paintings. 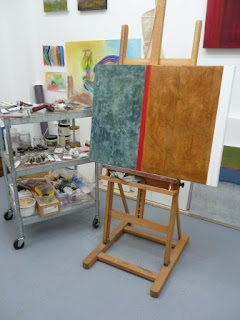 I managed to clean up my desk somewhat for the show.  The wall has an ever-changing selection of drawings, postcards, notes, and dried leaves and flowers taped to it. 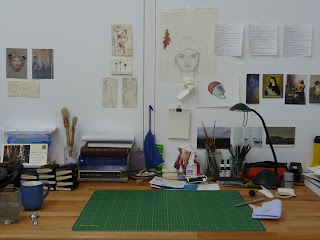 Looking over me as I work is my Donkey Skin girl, inspired by that fairy tale, who happened a couple of weeks ago.  She has been joined by my Blue Man who used to hang on the bookshelf on the other end of the studio. 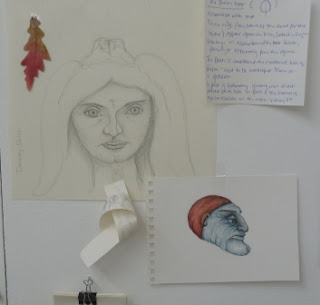 It was a good weekend which has confirmed how much I enjoy this creative path that I've chosen.  Or which has chosen me.  My thread has been spun.
Posted by Lynn at 09:52