Last week was a good writing week.  I met (well, almost met) my self-imposed quota of pages for what I am calling a "final first draft" of a story I wrote a couple of years ago.  There have been a few changes: it is no longer set in a large, modern North American city, it's now set in Eighteenth Century London; and it is no longer for Young Adult readers, but for middle-grade readers.  I'm starting to understand what one so often hears, about a story writing itself.

This is the notebook for this project.  The postcard is one from the Museum of London, and is an oil painting depicting London ca. 1630.  It's a bit before my story's time, and the Great Fire of 1666 would have destroyed a good many of the buildings in the painting, but it still helps pull me away from our time, into a more distant one. 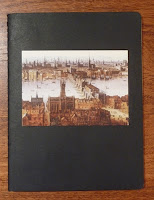 Because of a particularly bad computer-ate-my-writing experience, whenever I finish writing for the day, I try to print out what I've written and add it to a binder specifically for that story.  Now that my characters have moved back in time almost three hundred years, I've had to give them new, period-appropriate names.  I've done this for most, but not all of them.  It's proving very difficult, especially when a character has lived with a name for so long.  Somehow, radically changing other fundamental things about the characters as a result of the temporal move has not been nearly as difficult.

I have also been reading some of my research books - though I haven't got nearly as far with that as I had hoped.  If I leave my reading for the end of the day, I can't seem to get past a couple of pages before sleep carries me away.  I should do it in the morning when I'm fresh and caffeinated.

One of the books I've started to read is proving fascinating.  It's a biography, written by Kathryn Shevelow, of Charlotte Charke, actress and one of the Eighteenth Century's most colourful and original characters.  A very independent woman; she shunned, from an early age, the normal pursuits of a lady, and instead took to hunting, horseback riding, and wearing men's clothing both on stage and off.  She eventually left the stodgy theatres of Drury - where her famous father Colley Cibber had played the roles of actor, playwright, and manager - and turned to a new anti-establishment theatre troupe run by a young Henry Fielding - who would later write the classic novel "Tom Jones." 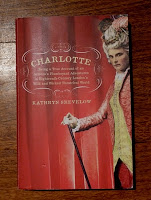 When not thinking about the writing, I've spent some time organizing things for more collages.  I wanted to add a few more to the poppy series and worked on some sketches and drawings. 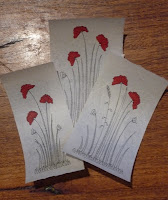 Though the drawings are stylized, I always start with photos of actual plants for reference.  One of my favourite jumping off points is a book I purchased a few years ago when we had a garden, and before I realized that, as much as I love them, I am hopeless with plants. 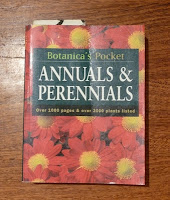 Getting ready for these collages was an opportunity to look through some of the papers I've been collecting, hording, squirrelling away for years.  These gorgeous marbled papers are from Florence (the photo doesn't do justice to their rich colours and fabulous patterns). 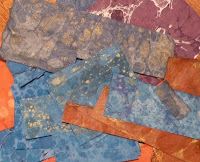 And my favourites, an assortment of Japanese Chiyogami papers, a couple of miscellaneous ones from Italy, and a few others which I purchased, also in Toronto, so long ago that I'm afraid I've forgotten their country of origin.

I've been asked, from time to time over the years, whether I collect anything.  The answer has always been "no" as I tend to be whatever the opposite of a pack rat is - to a fault.  But, I think if I'm ever asked that question again, the answer will have to be "paper."
Posted by Lynn at 09:26