Over the past week or so, I've been playing  with collage using the papers that I painted a little while back.  I've made a departure from the ones I'd been making before which featured flowers and plants done in a stylized way, very much influenced by my love of Art Nouveau and Art Deco, and especially the point where they meet.  (Perhaps I've just been watching too many Poirot reruns).   I still plan to make more in this style, as I quite enjoy doing them, but I'm also interested in the process of making more abstracted collages with papers I've coloured. 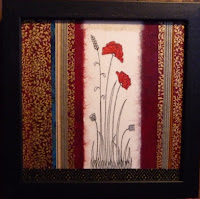 The floor of my room was once again in a state of absolute chaos and I had to make potentially body-unfriendly leaps to get to my computer and writing table. 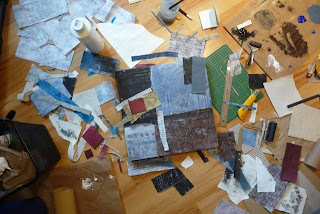 In the middle of all that chaos is one of the larger ones I've been playing with.  It's nowhere near done, and I'm not entirely sure where it's going as it keeps leading me one way and then another.  Below are three smaller ones (ca. 20 x 20 cm.).  This is the approximate size of my botanical collages, and I am finding that it's a much more comfortable size for the medium than the larger one (ca. 40 x 40 cm.). 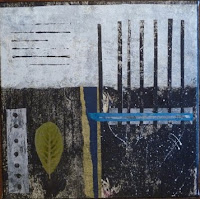 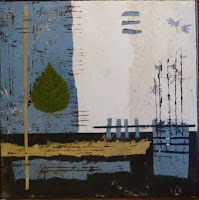 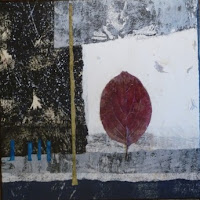 This past Autumn, I collected and pressed some leaves.  I've used one in each of the collages.  Next Autumn I'll have to collect more.  Although there are certain similarities between the two styles of collage, they are, naturally, quite different.  Both processes are enjoyable and seem to appeal to, and challenge, different parts of
me.

As I have so many little stretched canvases which I've purchased for this purpose, I decided to have a bit of fun of a different kind the other day.  Lately, I've had banshees on my mind.  In the current story I'm writing there is a band of banshees, and in another story, currently on the back burner, the protagonist is a banshee.  I've long had a fascination with these mysterious creatures which straddle the line between ghost and fairy.  I blame it on Siouxie Sioux.  When I was a wee lass of around fifteen, I absolutely loved Siouxie and the Banshees.  That started it all.

Part of their mystery is that Banshees are solitary.  And, unlike so many other female fairy-folk, they are feminine without being a femme fatale.  They sometimes appear as a beautiful young woman, other times as a terrifying crone.  Sometimes washing blood stained clothes by the ford of a river in Scotland, other times scaring the bejeebers out of guests in the manor home of some Irish lord soon to pass from this world to the next.

I've started a sketch in oils of one.  When she's done, she'll sit on my wall at my writing table.

Once again, the influence of the Art Nouveau movement can be seen.  (Thank you, Klimt.)

The banshees of my current story are leading me away tomorrow.  I'm fortunate enough to be heading to London for an overnight, to see an exhibit at the Foundling Museum called  "Threads of Feeling"  The original The Foundling Hospital was established in 1739 by Thomas Coram, and was financially aided by such London pillars as Hogarth and Handel.  To this day, one of London's largest children's charities is named for Coram.

The exhibit I'm going to see showcases more than 4,000 pieces of fabric which were attached to the entries in the ledger books of many of the babies admitted to the hospital between 1741 - 1760.  These pieces of cloth were sometimes given by the mother as a token, and were other times snipped, by the attendants, from the clothes the child was admitted in.  It's a rare collection and insight into eighteenth century dress of the poor.  It's going to be fascinating, and it's going to be incredibly poignant.  I'm looking forward to seeing it, but it's not going to be an easy exhibit to view.

When I return, I will be sure to post about the experience.