Ok.  That's not really the order I wanted to put things in.  The first thing I wanted to mention - because I'm frankly giddy over it - is that my poem "skin" has been accepted by Mythic Delirium.

Mike Allen has posted the poems to appear in Issue 28, to be released Spring 2013:

I'm thrilled, and looking forward to reading this issue. May sound corny, but it really is an honour to have one of my poems included.  Many thanks to Mike and Anita for including it.


A couple of days ago, I went to an outdoor market in town.  They had stalls selling everything from fifty different types of brushes, to ones selling beautiful ceramics.  Some sold antiques.  I scrounged through these, looking for items for my collages.  Unfortunately, it was slim pickens.  No letters older than WWI, and most of the people in most of the old photos didn't speak to me.  Got some old keys and coins too. 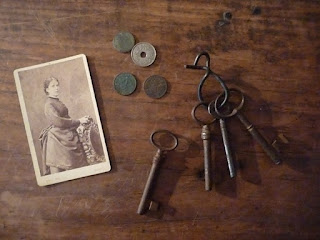 And - another of the new, smaller collages I've been working on. 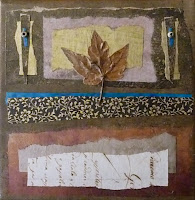 
[edit]
Heavens, Valerianna just reminded me of the storm - I'm a bit sheltered from news of it, I'm afraid.
Wishing everyone well who might be affected by it.