giving the past life in collage and poetry

On my visit to London last week, I walked past all sorts of wonders and delights.
A shoe tree growing over the Thames across from The Tate Britain. 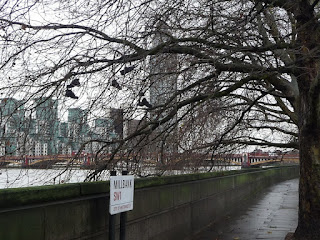 Borough Market which I walked through to get to my b&b the end of each day.  It's my favourite market in London partly because of its whimsically Victorian feel; partly its amazing location under London Bridge; and partly because you can buy the most *amazing* food there.  Everything.  From paella to falafel to street-dogs.  From cheeses to fresh fish to meat.  During the day it hums, alive with sounds and smells.  At night it has another sort of magic. 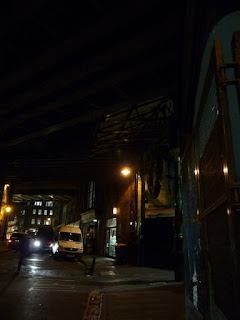 On an afternoon stroll near The National Gallery and Charing Cross Road, I encountered more Canadian flags than I've ever seen within a mile of each other back in Canada.

I visited antiques markets.  This one at Camden Passage in Islington, north of the river.  It's a neighbourhood I'd never been to before, but will certainly return to.  From what I saw, it's a vibrant mix of grotty and funky; artsy and sober. 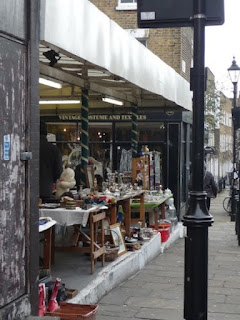 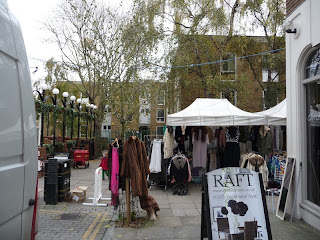 On Thursdays, Spitalfields Market holds its weekly Antiques Market.  This was one of the reasons for my visit to London.  I was after nineteenth century letters and photographs.  In my original Spitalfields collage series, I used the photos I'd found on my first visit to the market and made collages from them including the first lines of stories which I wrote, printed out, and pasted to the collages. 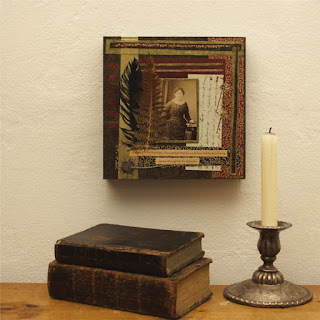 ("It was only in the morning's solitary twilight that she could hear that feathered song murmur through her thirsty bones.")

I came home with a pocket full of old photos.   Since I can't possibly know their stories, I like the idea of creating ones for them. 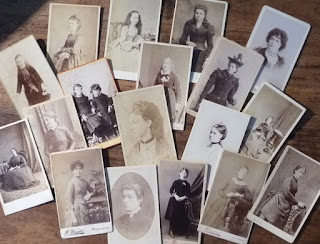 As I spread them out on my table, I was startled to notice that they were all of females - with one exception.  This was such a surprisingly touching photo of a man and his dog that I had to take it along with me. 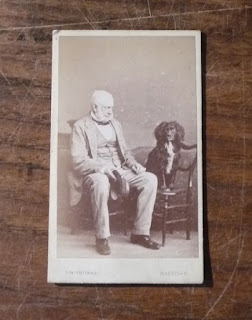 And I found letters.  Lots of lovely, old letters.
Those that I could read were mostly regarding payment of accounts.  One was from 1832 written by a fellow asking whether the man he was writing to (one he'd never met) might have a placement at his brewery for his brother for two to three years.  I can imagine becoming obsessed with the past through old letters. 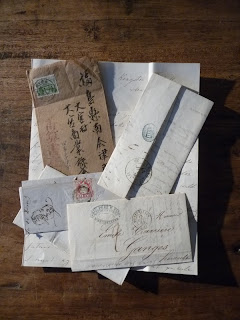 They're even lovely as objects, regardless of any social-historical significance. 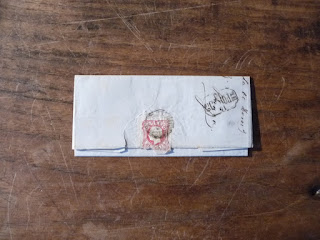 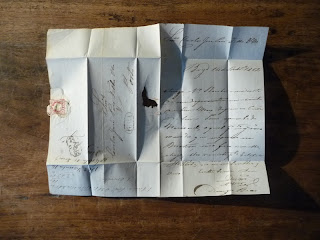 Unfortunately, I have to cut or rip them up for my collages.  I always feel an unpleasant twinge when I do this. 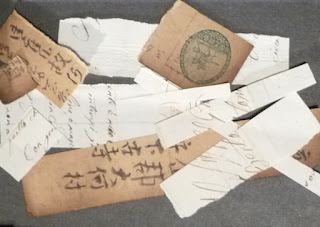 But, hey.  So it is with art.  Here are my latest collages using fragments from the new-old letters. 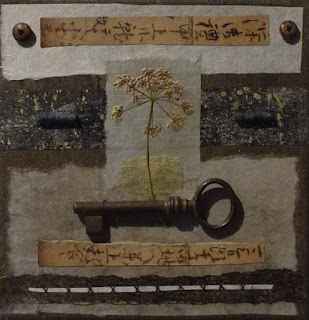 I recently bought some mini wood panels: 10 x 10 x 3.5 cm.  Here's the result.  It can hang on a wall, or sit on a shelf.  It was fun playing with a completely different format. 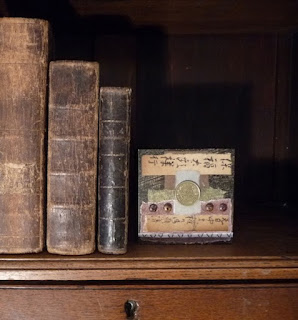 And a not terrible smooth segue from collage making to poetry, my poem "before" has been accepted by Niteblade Fantasy and Horror Magazine for their March 2013 issue.  I'm thrilled.  Thank you so much, Alexa!