As my train approached London last week, I had that feeling in my stomach that I always get when arriving in that city:  part excitement, part a feeling of returning to somewhere familiar (from having been there before, but also can the land of your ancestors resonate in your blood?), and part a gearing myself up for a noisy, chaotic, bustling place where past and present seem to live side by side in a crazy temporal patchwork.

My first stop was The Foundling Museum. Photography was not allowed inside, and I would have taken a picture of the building, but there was a large tour bus parked out front pretty much obscuring it.

Though these are the original grounds of the Hospital, the building itself is not the original grand Hospital building.  As the city of London grew and grew, what had been an idyllic site on the edge of the city, had now become central and noisy and polluted.  In 1926, the children were relocated to facilities outside of London.

The original building was torn down, though parts were dismantled, stored, and have been reinstalled in the current Museum building at 40 Brunswick Square.  They have preserved the beautiful oak staircase, as well as a couple of rooms - the most magnificent being the Court Room.  This was where the Board of Governors would conduct meetings, and where functions for important guests would be held.  This room (with exception of the floor) is original eighteenth century, and was painstakingly reassembled in 1937.  The ceiling is a dizzying marvel of plaster work.

The Hospital was the brainchild of Thomas Coram, whose portrait, painted by William Hogarth, and which hangs in the Picture Gallery in the Museum,  is on the cover of the Museum's catalogue below.

This man, of humble origins, made his fortune in shipbuilding after apprenticing at the age of 16 to a shipwright.   He spent many years in North America, and eventually returned to England.  In 1722, in a state of semi-retirement, this man of endless energy and temper and idealism, sickened by the conditions that the poor - and particularly children (babies were often literally left at the side of the road to die) - were living in in London at the time, decided to found an orphanage.

Coram had a history of philanthropy.  Back in North America, he had tried to set up a colony for "destitute ex-soldiers" as well as campaigning for "inheritance rights for daughters of colonists and land rights for Mohicans."  So, he would have been well aware of the difficulty in getting something as ambitious as a Foundling Hospital off the ground, though perhaps he didn't realize that it would take a full 17 years for it to grow from the germ of an idea, to a chartered reality.

Two of the other main contributors to making this Hospital a thriving success were the artist and social commentator William Hogarth, and the composer George Frideric Handel.  They used their influence and talents to make the Foundling Hospital a very fashionable address for parties amongst high society, and in making it a venue for British painters to exhibit their work.

It's interesting to think of the parties with their music, and fancy gowns, and chatter, not far from the masses and masses of orphaned children, living a very different kind of existence, consisting of small portions of simple food, basic clothing, a regimented daily routine, and hours learning skills which would hopefully allow them to find work as apprentices once they were released into the world.  But, the fact that they had any existence at all was, in most cases, a direct result of the Hospital, and its wealthy sponsors.

How this exhibition came about is interesting.  It started when the curator of the exhibition, John Styles, was researching his book "The Dress of the People: Everyday Fashion in Eighteenth-Century England" (2007).  It is, of course, impossible to find surviving samples of complete outfits of the poor from that time, as they would be worn to threads, and often converted to other uses.  Mr. Styles wondered whether he could get any closer by looking at samples of the textiles used to make the clothing of the poor and was directed to the massive collection of snippets of cloth in the keeping of the Foundling Museum.  It is, as he says in the catalogue, "Britain's largest collection of everyday textiles" with some 5000 swaths. 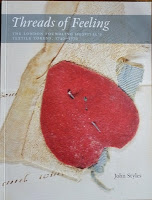 Walking through the exhibition, one is very much aware - and the curator makes a huge point of this - that each little swath of fabric represents a child.  These swaths were added to the registration document of each child from a period between 1741 - 1760.   During this time, the process of putting a child up for adoption was an anonymous one.  However, many children were given these tokens by their mothers perhaps as a way to identify and reunite them once again (though this rarely happened).  Other times, the bits of fabric would be cut from the child's garments by the staff member who processed their admittance.

Walking through the items on display was quite devastating.  I'm not one to cry in public, but I was relieved to have had the foresight to have brought a packet of tissues with me.

As photos weren't permitted, I purchased a collection of postcards prepared for the exhibition. 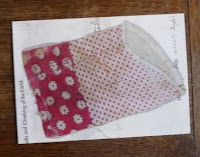 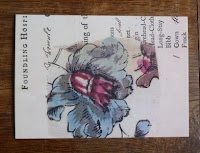 Flannel embroidered with a flower (before pink and flowers were associated with girls).  Foundling 12843, a boy, 1759. 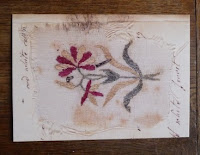 One can only imagine what the experience was like for all involved.

I found the exhibition to have been very well put together; respectful of everyone involved: the babies, the mothers, the staff of the Foundling Hospital.  It was not sentimental, nor was it in any way callous.  It dealt with a very real, very difficult topic with respect.  It is a fascinating and unique piece of social history.

The exhibition continues only until March 6, but the Museum itself is most definitely worth a visit on its own.

Coram's name is still attached to a London based children's charity running today.  On the fence surrounding Coram's Fields just south of the Museum is this sign.  I love the condition of entry. 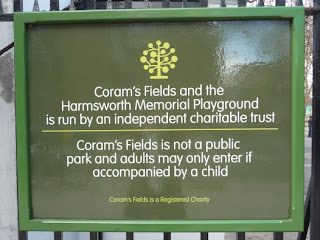 I was going to write more about my trip to London, but I think I'll leave that for another day.
Posted by Lynn at 04:50