The manuscript I've been working on lately, is a story set in Eighteenth Century London.  Through my research, I discovered the Foundling Hospital and - later - Foundling Museum.  That was the main point of interest of my recent overnight in London, which I wrote about in my last post.

On that visit, I was hoping to find the memory or sense of that past time; after-images which seem to linger and accumulate in a place like London. I did.  Both of that time, and of many, many others.

The best way to get a sense of a city is to walk around in it.  So, once I'd been to the Foundling Museum - my first stop - I spent my remaining two half-days walking around the city.

The London of Henry Fielding (author of the book I'm currently reading, published in 1749)  wouldn't have been all that different from the London of today in many ways.

Though the London I was looking for is rooted in the past, it is still very much present today:  Huge, loud, chaotic, people being moved about in wheeled vehicles, filled with clashing smells, bustling, peopled by locals and by inhabitants from other parts of Britain and the world: London hasn't changed all that much over the centuries.

(view from a Covent Garden cafe)
Covent Garden was a must see.  Even though the structures there are mostly different to those that were there almost three hundred years ago, one still gets a feel for the busyness of the place.  And there were performers of all kinds: musicians, jugglers, acrobats - some of them really good, others really, really bad - as would always have been the case. 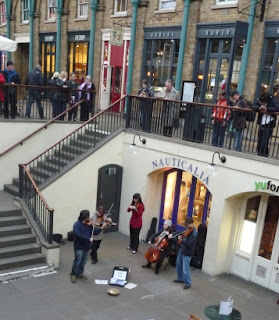 This was a group of fantastic, young musicians.  That night, when I went, again, walking through the Market, there was a fabulous acrobat with nothing but a boom-box set up on the upper level.  He did a show that was a mix of break-dancing and acrobatics, culminating in a diving leap from the ground through the hooped arms of a standing audience member, and landing in a perfect roll-and-stand.  I was too busy watching to get out my camera.  I strolled down by the Thames.  In the past, it was notoriously smelly.  Thankfully, it's not so these days, though I wouldn't fancy a swim in it.

The next day I went to my absolute favourite market: Borough Market.  It's a huge food market located in Southwark and most of the current buildings were built in Victorian times, though the original Market dates back to the 13th century.  It's currently located under a railway viaduct.  It's busy, and noisy, and the architecture is amazing - all brick and iron. 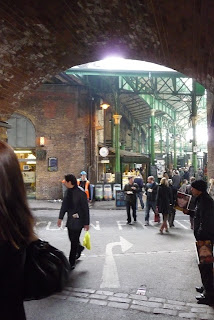 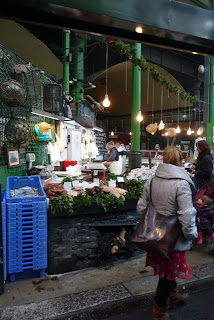 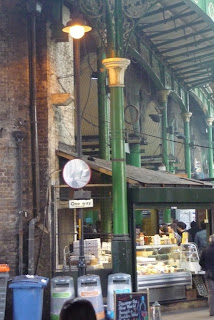 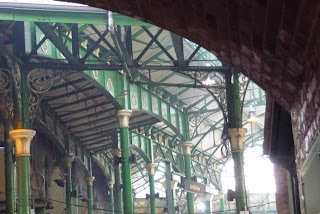 In keeping with the Victorian theme, I found my way to a strange sort of museum.

I've long been a fan of Sherlock Holmes.  I've read all the stories, and I've seen countless movie and television renditions of the stories.  (I was in the Basil Rathbone camp until I saw Jeremy Brett in the role.  He absolutely lives the character.)

I must say, it was a bit of a disappointment. As an example of what a Victorian city dwelling would have been like, it's is of interest.  They have papered the walls and furnished the rooms accordingly. 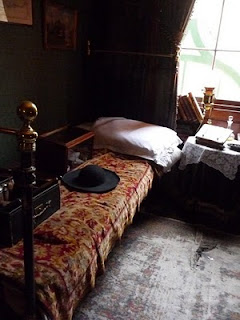 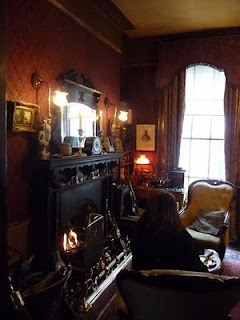 But I had been hoping to find information about Arthur Conan Doyle and some talk of the Sherlock Holmes phenomenon: a character so well loved that he has been adapted to other media, as well as to blur the line between fiction and reality for many people - the number of fan-letters written to Mr. Sherlock Holmes over the years is astounding.

I'm not quite sure why there isn't more information there.  Apparently there was a dispute, some years ago, between Doyle's daughter and the museum: she didn't approve of a museum being set up for a fictional character and refused to donate any of her father's items to it.

At the very top, was this fantastic toilet. 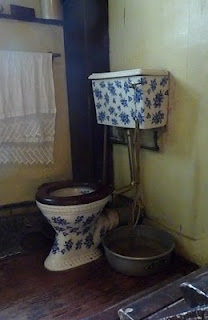 After the museum, I took a stroll through Regent's Park, just at the head of Baker Street.   At the edge of the pond, was a man feeding the birds.  As I got closer, I was amazed to see the variety of birds: ducks, geese, swans, herons, gulls, and - yes - pigeons. 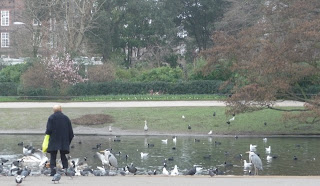 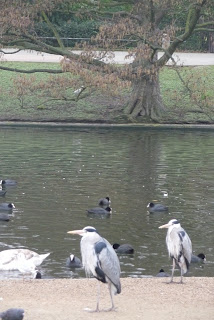 I walked along the edge of the pond where willows hung branches into the water (note the nest at the top.) 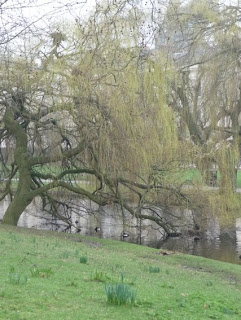 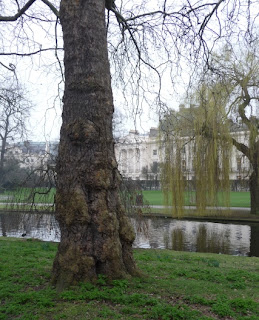 A path that led through more trees. 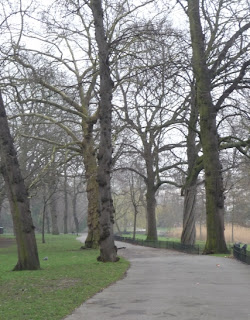 Past cheeky squirrels who thought I was reaching for vittles to toss them when I fished in my pocket for my camera. 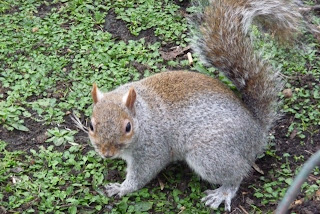 To this mysterious ivy-eaten hut.  (I was dying to hop the fence for a closer look.) 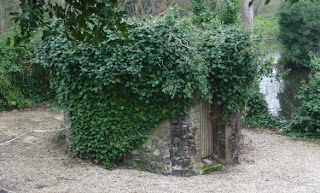 After the breather of the park, I plunged back into the other London.  And more markets.  First, Leadenhall Market.  It was my first time there.  Parts of it were used as "Diagon Alley" in the filming of the Harry Potter movies.   It's mainly a market for upscale shops, though there were vendors selling paintings and shoe-shine boys (men, actually). 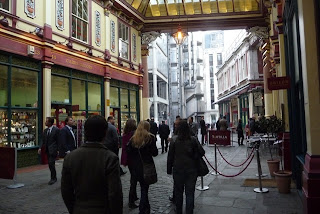 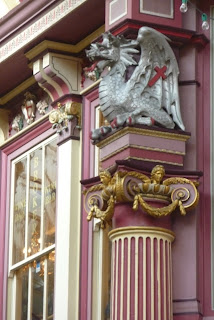 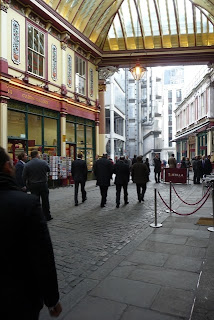 Next stop,  Spitalfields Market which is like a gigantic, covered yard sale where one can buy anything from faded maps to old Toby Mugs to vintage dresses. 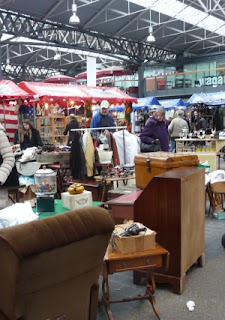 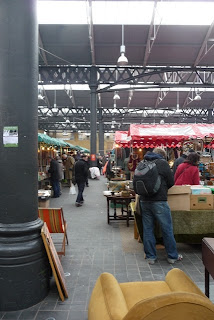 I picked up some old letters and photographs from a woman's stall. 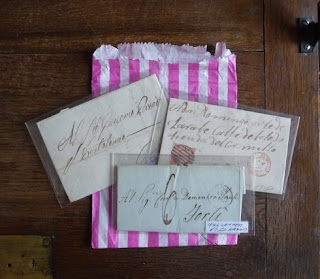 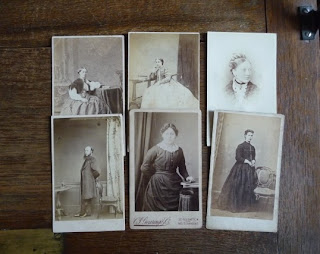 I don't know what I'm going to do with them, but somehow I just liked the idea of having them.  Of course, I do wonder how the people to whom they belonged would feel about some stranger, a century later, being in possession of them.  Does feel strange.  For now, they sit in my secretaire, which belongs to roughly the same period.

Finally, I had a bit of time before catching my plane, so I browsed in one of the bookshops, and came across this: Peter Ackroyd's "London: The biography."  It's one I've had my eye on for a while.  Seemed like the right time and place to finally buy it - for when I've finally finished the nearly 900 delightful pages of "Tom Jones."