Negligent Muses and Cobbling Tools. Or, A Short Post.

For a while now, I've been waiting for the Muse of Blogging to come along and whisper into my ear, or tickle my fingertips, or do whatever it is that a Muse does.  No luck.  So, as it's been...well...a little while since my last post, and I'm sitting at home with a nasty cold unable to do any work, and I have to leave soon to pick up my youngest who's done school at 11:15 today, I thought I might take the opportunity to cobble a post together.  Here goes.

Last week, my stepson turned 22.  We invited him over on the weekend to celebrate, and he requested that we go on a bike outing as he's just bought himself a sweet mountain bike and wants to take it out at any opportunity. 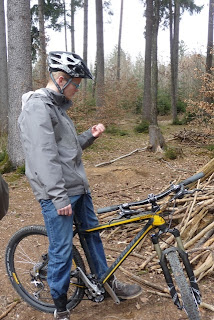 So we did.  And it was fun.  We don't have a car, and as a result, both of our younger boys have become excellent cyclists, which makes it possible to go for a four or five hour bike ride - and, here in Munich, you're never far from a Beergarden for rest and refreshment.

We headed down the the Perlacher Forst, which is at the south end of Munich.  It's a large, cultivated forest with paths - some paved and some very, very rough - running through it.  It's not a beautiful, natural forest, but it's close and it's a great place to cycle.  My stepson got to try out his bike on some of the rougher paths.

Throughout the forest are fountains with whimsical carvings.  It used to be believed that the water pouring from them was from springs, but it's actually from the municipal pipelines.  (No hardship though, as the tap water in Munich is excellent.)  They've even thought to put out a bowl for dogs. 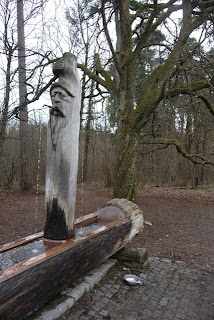 Last year, the kindergarten my youngest attended had a week where they came to a secluded spot in the forest every day.  He wanted to look for remnants of that week, and found some. 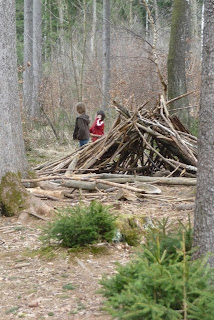 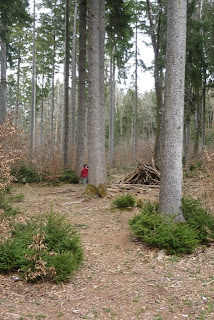 On our ride, we passed a few streams and at each bridge we had to play Pooh Sticks.  One of the things I love about being a mother, is discovering and re-discovering children's literature.  Our copy of "The World of Pooh" which has all the Winnie the Pooh stories, is already falling apart from so many readings.  In one of those stories, we discovered the game of Pooh Sticks where everyone stands at one side of a bridge, drops a stick into the water, then runs to the other side to see whose comes out first. 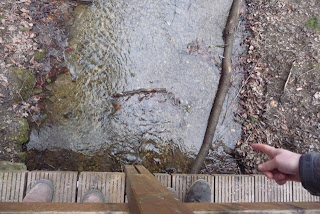 On the way home, we passed a caravan set-up which is one of a couple of permanent Wald or Forest Kindergartens they have in the city.  The children go and spend most of each day out of doors regardless of the weather.  Brilliant.  (I only wish we'd known about it earlier - though I must say we were very lucky with the kindergarten we found.) 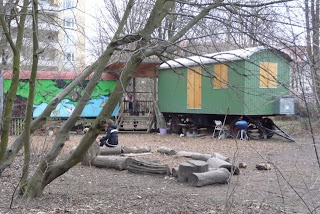 Along the bicycle path home, we passed this rather imposing building.  It belongs to the Order of the Knights Templar (whom I thought were gone rather in the way of the the Knights of the Round Table.)  I've heard that once a year they open the building up for tours.  Must go next time.  Each time I pass by, I wonder what is it that they actually do in there? 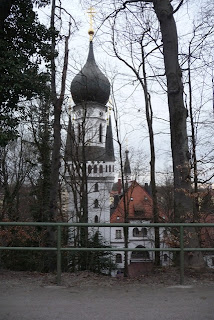 Finally, we returned home.  For dinner, my stepson had requested oysters and Scotch for an appetizer.  I'm not much of a scotch girl, but I must admit it is a surprisingly good combo.  I kept some of the shells.  They're gorgeous. 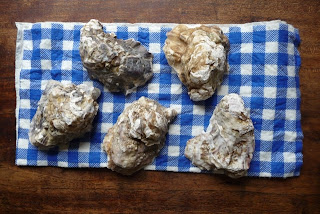 For the main course, he and my husband had gone shopping the day before and had brought home a fresh Irish Chard.  My stepson filleted it and cooked it for us.  It was amazingly good.

I'm completely useless in the kitchen, but my husband is a wonderful and enthusiastic cook, and his son is training to be a chef and will often come over and cook for us.  (I might not like to cook, but I love to eat, so I'm lucky to have these two talented fellows around.)

What I have been busy with, in my not-slaving-over-a-hot-stove time, is more collage and painting.

After thinking about the old photos and letters I bought in London (and posted about in my last post) I came up with an idea which would combine my love of collage with my love of writing.  I put this one together with a line of text at the bottom which will be the first line of a story I'm going to write about the woman.  There are certain elements there:  her, the letter - written in Italian, fabric from India, hand painted papers, and bracken and a flower purloined from a hill in Dartmoor.  I figured with these elements, a story would evolve.  The first line has at any rate:  "She returned from India with a splinter of its saffron sun lodged deep in her heart."  I'll work on it over the next couple of weeks.  I'd eventually like to do the same with the other five photos. 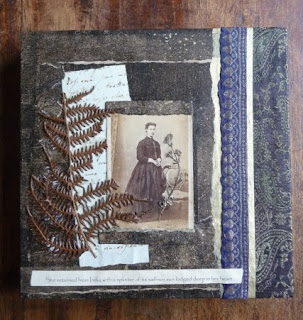 I've also been thinking a lot about my painting lately.  Doing more thinking than creating, but sometimes it has to go like that - as long as it's just for short periods.

Before we moved to Germany, almost three years ago, I was getting into a painting groove that was working for me.  I was selling regularly, and had been approached by gallery offering me representation and a solo show.  Our move put a temporary stop to all of that.

It was difficult adjusting to a new place and a new language.  Exciting, but a challenge.  Our boys were also young (3 & 6) and we had my, then, 86 year old father-in-law living with us and had to help him adjust to a return to his homeland.  That first year was an artistic write-off.  I made only three paintings and they were exquisitely bad.

Then our situation changed again: my father-in-law moved back to a nursing home in Canada (which worked out really well, thank god, and he's still whinnying with us, having turned 89 at the beginning of this year), and we moved into an apartment with a huge shared backyard which is a children's paradise.

I returned to painting and tried to return to the style of painting I did in Toronto.  Didn't work.  My works had been large abstracts in oils using mainly reds, burnt siena, ochres, and other earthy tones.  Somehow I couldn't seem to make it work.

This past year, in particular, has been very trying artistically.  I'd fallen into the trap of painting to please, which, for me, at any rate, doesn't work.  After reaching an artistic crisis, I did an about face and retreated into Collage.  I'm grateful for that, as it's a wonderful art form, and I will continue doing it, but having a break from oil painting let me discover that that is really where my heart lies.

The move to Germany, and all that went with it, had changed certain things in me.  Duh.  The question was: how to let these new experiences make their way into my paintings.  I tried an analytical approach.  Didn't work.  I tried a symbolic approach.  Also, didn't work.  Finally, I tried going back, not to the style of painting I was doing in Toronto, but back to the way of painting: that is, using an emotional, expressionistic, visceral approach.  And it feels like it's working.  Doing this, I managed to complete three canvases which I'd been struggling with for ages.  It feels like a dam's broken.  I'm finally experiencing that exhilaration I used to get when painting or even just thinking about painting. 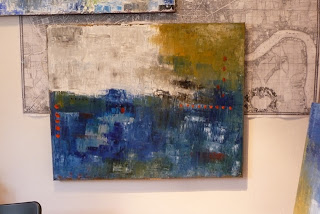 Ok.  So that was a longer post than I had intended.  And perhaps I had more to say than I realized.  Maybe the Muse of Blogging was there all along, she just wanted me to get off my butt and invite her over.
Posted by Lynn at 05:22