Colour. And Mark Rothko. And a really, really cool witch.

This is a bit of a rambling post about colour.
Lately, I have been thinking about colour.  Perhaps obsessing is a better word.  Partly because we are turning from the grey-white-beige part of the year to the green-yellow-purple-and every other colour imaginable part; and partly because colour pallet has been a topic with my painting.
As I mentioned in an earlier post, I'm going in a new direction with this current series of paintings.  As colour is one of the key elements in these paintings, it's been on my mind. 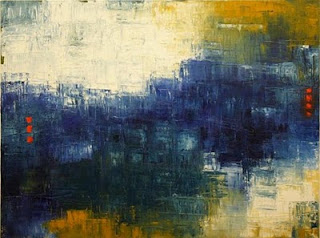 (Blue 2, 76x102cm. Oil on Canvas.)
Everyone has their own personal colour pallet:  a favourite colour; colours they like to wear; colours they like to paint their walls; colours they like to upholster their sofas.
I first noticed this back in grade school.  Being both shy and myopic, I had a problem:  glasses.  I was loath to wear them to school, and didn’t (until my eyes finally got so bad that I had to).  Until that point, with glasses tucked away in my pocket, the world around me was an impressionistic landscape.  I became good at recognizing people from afar by the colours they wore.  I still remember one girl who always wore yellow: she is forever etched in my memory as an oversized, blurry egg yolk
I have always adored colour.  As a child, I remember staring at certain colours (usually blues and purples) and feeling as though I could be swallowed up by them -  I wanted to dive into them and enter the mysterious world of sensations unique to each particular shade.  Perhaps I was a bit of an odd child... 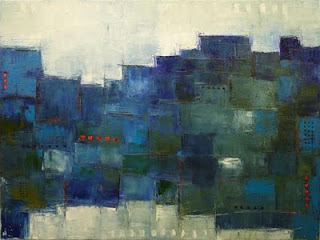 (Blue 4, 76x102cm.  Oil on Canvas.)
Later, when I became interested in creating visual art, my pallet would change depending on what I was working on.  For a brief spell, I avoided colour altogether by spending hours creating black and white ink drawings with spider-silk-like lines, and thousands upon thousands of tiny dots.  At some point  my pointillism phase ended.  Perhaps it was the threat of carpal tunnel syndrome, or of going cross-eyed, or simply of going stark raving mad.  Whatever the reason, it did, mercifully, come to an end.
Then, a few years ago, when I dedicated myself to painting on a close to full-time basis, I started experimenting with colour and form.  My favourite colour is blue, and I played around with blues of all kinds.  It was a disaster.  I was completely unable to use just about any shade of blue in a painting.  What would come out were fiery reds, deep yellows, and lots and lots of burnt sienna.  At one point a fellow who’d purchased a couple of paintings, asked gently if I would be creating any with blue.  I explained my dilemma.
But now, all of a sudden, blue has been happening.  And it’s been a joy.  Part of my process when painting abstracts in oils, is to allow the colours to interact with the ones next to them: blending, and criss-crossing, and influencing.  I’ve always been very much impressed by the colour blending in the weaving of textiles, and employ a technique which mimics that to some extent.  (One of the pieces which the fellow I mentioned above has is titled “Ancient Weaver” and I have always wanted to revisit that style and create a series based on it.) 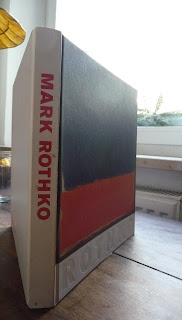 This love of colour and how colour resonates with something deep inside the viewer, is what first made me interested in the paintings of Mark Rothko, and which, two summers ago, led me to Hamburg to see an exhibition of his works. 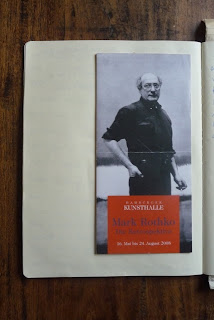 As I wandered through the rooms, it was impressive to see how much his style of painting changed through the course of his career: from earlier representational works often involving ambiguous subway scenes, or figures from Greek Mythology; to non-representational, amorphous colour blobs; to his later classic Rothko colour fields on huge canvases.
I entered one of the rooms and came to a painting which I hadn’t seen an image of before.  I froze in front of it.  This is what I wrote in my journal afterwards:
“There was one.  It is large, dark blue and black, from 1960.  I stood in front of it and had to fight off overwhelming emotions.  It was as though he had captured life, time, death, eternity, the mysteries of these things on a huge rectangular canvas.  I’ve never – never – been moved like this by a piece of art.” 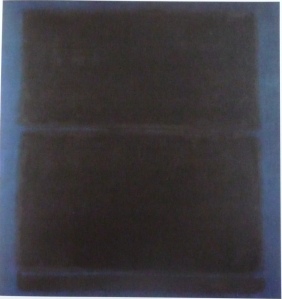 This snapshot of it, which I took from the catalogue, doesn't begin to capture the power of it.  It is huge, which is part of its impact, measuring 205.1 x 193.4 cm.
It is a great shame that so many of his paintings have become “poster art” as these later, huge works have enormous emotional impact which is only fully felt when they are experienced in person.
Rothko was surprised, and probably more than a little ticked off, when people said that they found his paintings peaceful, since they were born of conflict, and trauma, and struggle.  And he did struggle, until killing himself in 1970, at the age of 66.
Staying with colour, but wanting to move away from the rather heavy topic of suicidal painters, I will segue to cannibalistic witches who prey on small children whose parents have left them alone in the woods to perish.
Yesterday, my husband brought home some books from the library for our two boys.  One was a copy of Hansel and Gretel.  This version is illustrated by Jane Ray, whose illustrations are magical.  Her witch is fabulous.  The details are just brilliant: tiny toads, snakes, webs, birds, and eyes show up everywhere on and around her.  And the colours are amazing, jewel-like, eerily beautiful, and very, very theatrical.  Perfectly designed to entice any little children with a penchant for diving headfirst into pools of fantastic, devouring colour. 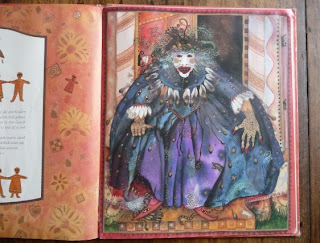 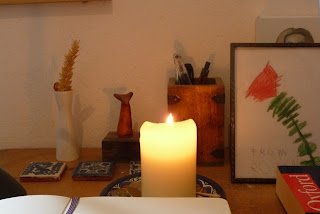 A good day for pots of tea.  And for candles.  I'd forgotten how peaceful candles in the daytime can be.  A lovely foil to the torrent outside my window. 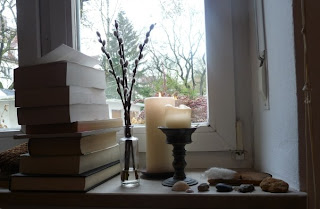 There is a ritual, practised here in the south of Germany each spring:  the harvesting of Baerlauch.  This is a plant which I was unfamiliar with before moving here, as it doesn't grow in North America.  In English it's know as Ramson, or Bear's Garlic, or Wood Garlic.  In Latin it's called Allium ursinum, and was believed to have been the first food that bears emerging from hibernation would eat. 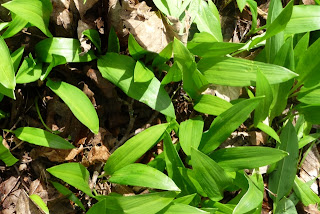 Patches of its bright, spring-green leaves can be seen carpeting areas under trees, around ponds, along bicycle paths.  It grows in abundance here, though in other parts of Germany it's verboten to pick it, as there is very little of it left. 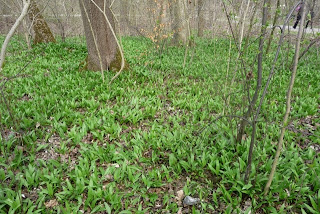 Its leaves pierce through the dead ground cover of winter. 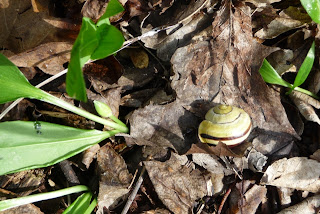 It looks very similar to other plants which are starting to grow at this time of the year, including Lilly of the Valley, which is toxic.  When rubbed, the leaves give off a pungent garlic or chive smell which helps in case of uncertainly. 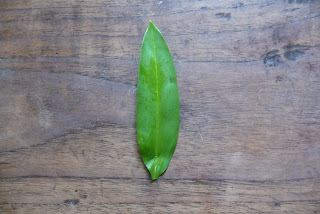 It's not uncommon to find people, especially older people, trudging into a patch, bag in hand, then bending down to pick some leaves. 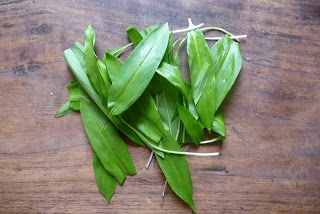 The leaves are popular in a soup, but the health benefits are only reaped when it's eaten raw.  A pesto is a popular way of eating it. 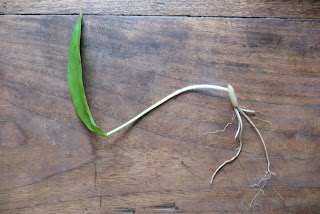 It is supposed to be good for stomach ailments, as well as to keep ill-intentioned people away from you.  Don't know about Vampires, though. 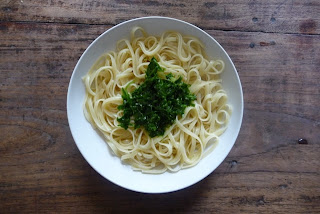 We chopped up the leaves, added olive oil, salt, put it on pasta and grated some Parmesan cheese on top.  It gives a wonderful flavour which is not as strong as garlic, but stronger than chives. 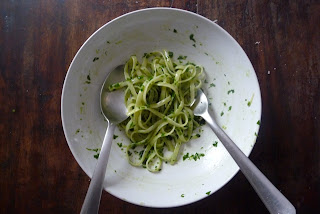 There is something incredibly satisfying about harvesting your own lunch.  Even if it's just a few green leaves.
Posted by Lynn at 01:36 7 comments: