A Storm of Black Feathers

The photos and letters I picked up at London's Spitalfields Market a few months back, have been slowly- very slowly- making their way into collages.  I posted the one below awhile ago.  She was the first.  I still don't know all of her story, but it's slowly unfurling itself to me.  I think I shall know it soon.
"She returned from India with a splinter of its saffron sun nestled deep in her heart." 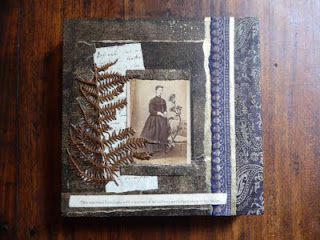 The first line of the character's story is integrated into the collage, as well as a photo, part of a letter, feathers, bits of cloth and paper, and pieces of foliage I like to collect: bracken, leaves, flowers.

I love the idea of a cabinet of curiosities.   As I work on these collages, I am beginning to realize that that's - to some extent - what I'm trying to capture with each one.  There are other items waiting for future collages in this series: coins, shells, small pebbles, bones and such.

This next one was completed the other day.  Her story is completely unknown to me right now.


"Her heart broke into a storm of black feathers." 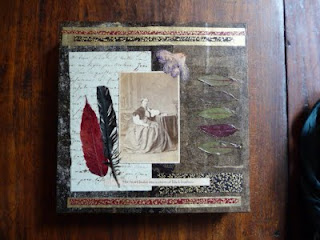 I'm looking forward to discovering her story.  The feather landed at my feet one day as I was on a walk and was looking - or asking - or hoping for a reply to half-articulated queries.

Perhaps the feather itself was not the answer, but rather the key to unlock the door behind which certain answers lie.
Posted by Lynn at 13:34