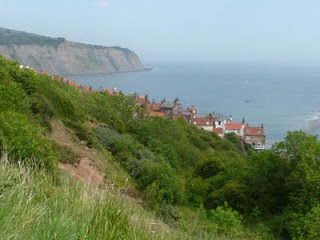 It's been the better part of a week since I returned from my week away at Robin Hood's Bay.  It was perfect.  I had no phone.  No internet.  I didn't now a soul there.  And the weather even cooperated.

While there, I took about a gazillion photos.  The place and the surrounding area is so beautiful that there are gorgeous views every which way you look.  Worry not, I haven't posted them all here, just a selection.

Here is the main road through town.  It really is as steep as it looks.  My self-catering flat was near the bottom. 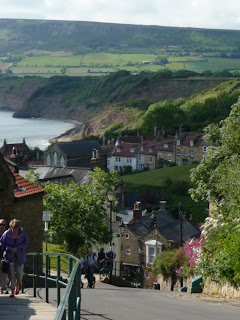 The village has lost nearly 200 houses to the sea in the past couple of hundred years.  In the 1970's a sea wall was built, and in the year 2000, a reinforcing wall of boulders was put into place.  Walking around, one is so aware of the sea, its relentless presence, its offerings and its threats.  It's amazing to me to think of a group of people - as these villagers were, and to some extent still are - who are at the mercy of nature in such an existential way.  It's easy to Romanticize the sailor, the fisherman, the coastguards, the women and children of the village, but that's for good reason.  They were living with nature in a way that I as a comfy city dweller can only imagine.

At the foot of town is the North Sea.  At low tide, one can walk and troll for treasures: shells, feathers, stones, and fossils. 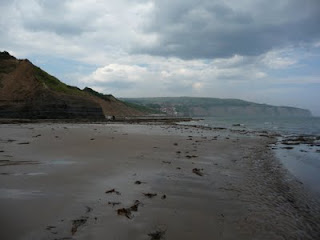 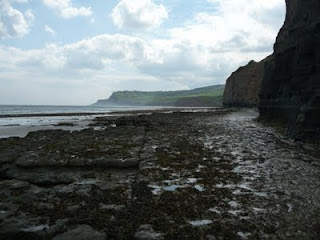 A cave typical of the area.  No forgotten store of smugglers' rum.   At least, not that I could find. 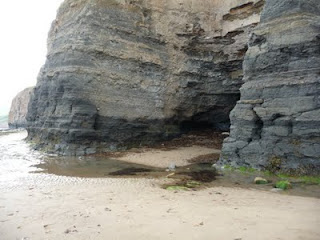 A path to nearby "Boggle Hole."  I had no idea what a Boggle was.  I do now: it's rather like a Bogart.  Afraid I didn't see any down there, not that they didn't see me... 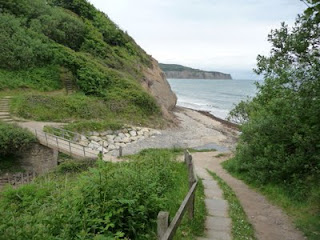 On one day, I took the costal path to Whitby.  The walk consisted of about 3 hours of magnificent views; views of the sea to my right, and large, sweeping fields to my left. 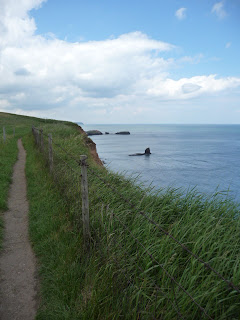 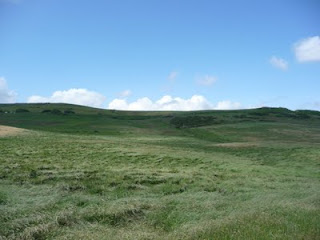 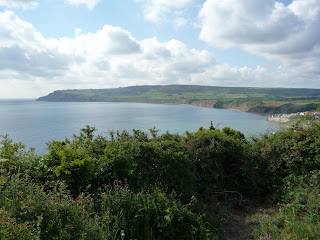 The sea and the sky would change every few minutes.  And within the course of an hour, the sea's colours would go from black, to Payne's grey, to every shade of blue, and into greens, and even beige, and to white.   Mesmerizing. 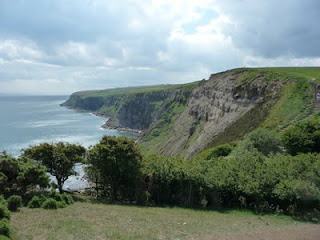 A gulls' rookery on the very edge of the cliffs. 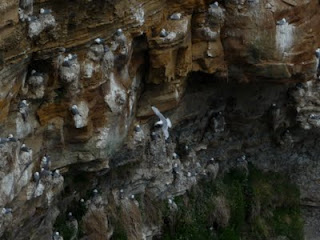 Before I knew it, the silhouette of Whitby Abbey loomed in the distance.  It's the ruin of a Benedictine Abbey, established in the seventh century. 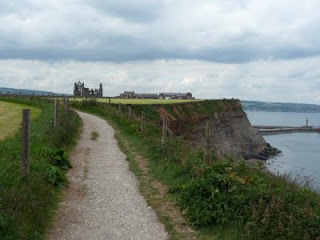 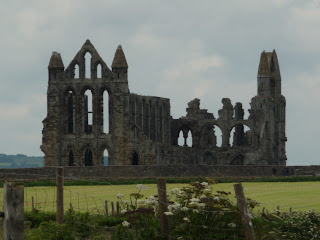 Unfortunately, by the time I reached it, my knee was out of commission.  (Didn't realize I had a knee issue!)  All of the steep downward climbing on the path and perhaps in the village seemed to have done it in.  When I got to the Abbey I was so miffed because of my knee that I didn't take a tour of it; I just wanted to find the nearest apothecary for a tension bandage.  To add insult to my injury, from the Abbey there is a descent down at least 100 steps into town.

Lobster pots on a Whitby dock. 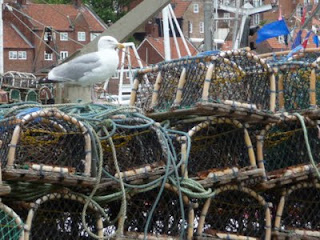 In spite of the knee, I did wander around Whitby.  One of my aims was the Whitby Museum.  It has a small fascinating collection including prehistoric fossils found in the area, Victorian bric-a-brac carved from local jet, items pertaining to Whitby's seafaring past, taxidermied local wildlife.  Of course, one of the main items I wanted to see was their "Hand of Glory".  Photography was not allowed, so I'm afraid I have none to show.  (My camera was probably thankful for the rest.)  I'm one of those people who is fascinated by the macabre, but I'm also a complete and utter wuss.  I had to do my utmost to put said hand out of my mind as I tried to get to sleep that night.

Back at the Bay. 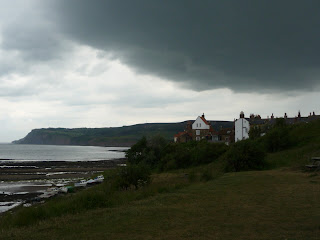 On my various walks, I found some stones and a clump of sheep's wool. 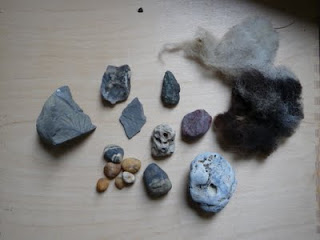 The closest I came to a fossil, was this rather interesting stone.  I have no idea what it is, but it looks organic and...well...fossily. 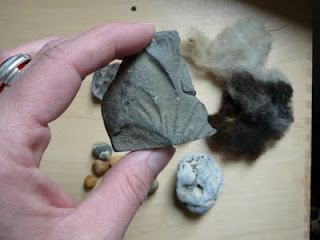 Over the past few months, I have been very much inspired by Milly's beautiful blog: drawings from nature.  She collects items from her sea-side walks in the lake district of England, and makes gorgeous coloured drawings of them.  I did my thing with some pencil sketches.   There is nothing like drawing an item from nature.  I am reminded of a quote by artist Alan Lee  which I came across somewhere - I'm afraid I forget where - in which he talks about how the act of drawing a tree (I think it was) is an act of deep reverence to the tree and to all of nature including the observer.   Must look that up - it is a beautiful, beautiful quote. 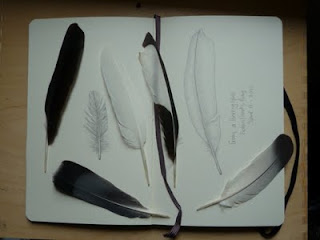 And when I wasn't out walking along the coast, or trolling the beaches; I trolled the three second hand bookstores in town.  To my delight, they sold copies of Agatha Christie mysteries very cheaply.  They are the old "Fontana" editions which I love the feel of and the cover art of.   I read this stack in the evenings.  Nothing like murder to get your mind off a Hand of Glory skittering its way across the floorboards. 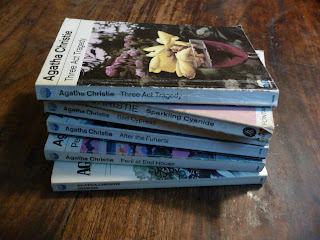 Theodora Goss, on her wonderfully inspiring writing blog wrote about Agatha Christie a while ago.  I remember smiling as I read it, as I also enjoy Ms. Christie's books, no matter how outmoded they might be.  (There are also, unfortunately, moments of racism and classism in some of her books which a reader must, if they wish to get to what's good in the books, ignore.)  Her plots are usually admirably tight, her wit sharp, and her observations of human nature so cutting and spot-on that I often find myself mentally nodding in agreement.   Here's one of my favourite covers.  It's from "Sparkling Cyanide" and features a lady's handbag, a class of Champagne, and a dose of cyanide.  Elegant and lethal. 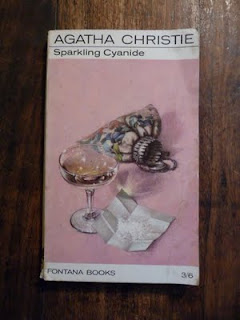 And, as I promised myself, I did a bit of writing of my own.  Here's the photo to prove it. 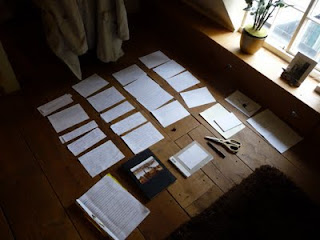 Well, not that that actually looks like writing, but it was.  Really.  I needed to get an overview of the chapters and scenes of my manuscript - which is closer to being done, but not quite finished yet.

I had a lovely time away.  Away from the distractions of day to day life.  A real retreat.  I find I need solitude fairly regularly in order to...to what?...I think it's to allow myself to listen to the quietest voices within.  This was the luxury version of it for me for which I am grateful.

Now, I need to take a bit of time each day to reflect on the trip and allow the impressions to filter through and - with luck - make their way into my work.  Not something which can be forced, but something which I want to try to think about now that I'm back in the rhythm of the day to day.

It is good to be back, though I do miss the sound of the waves and of the gulls keening overhead.
Posted by Lynn at 13:25