This morning, on our cycling route, my husband and I ventured a bit further afield than we normally do.  The weather was perfect and there weren't too many people out on the bike trails.

After a bit of unwitting and harrowing mountain-biking (must remember not to take that stretch again), and a gorgeous path through a forest (a path that was steep enough for me to decide that my bike probably wanted a bit of a walk at that point), we ended up at an old Benedictine monastery called Kloster Schaeftlarn.  After a brief pause, we started our trip back.

The Isar is the river which runs through Munich, beginning in the Alps.  We headed South (up river) along one side of the river for the first part of the ride, and returned on the other side, heading North to Munich.

At one point, as we rode along with the river on our left hand side, we began to hear music.  Loud music.  Loud live music with instruments.  Like a tuba.  And an accordion.  Or two.  Even a drum kit.  It got louder and soon we could hear singing.  Then we saw it:  a log raft with about 30 people - including band - sitting on benches, drinking beer, singing traditional German songs, talking, and just hanging out as the river carried them toward Munich.

We've seen them before, in the city, as they approach their landing place at the end of their hours-long run.  But seeing them out there in nature, on a Monday morning, with a glimpse of the Alps craning over the masses of forest all around was surreal.

Though I wasn't really in the mood for taking pictures, this was too good to resist. 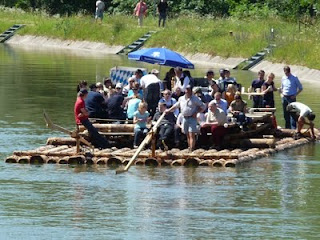 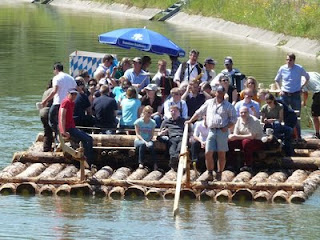 As they passed under the bridge we had stopped on, they waved, obviously all having a great time.  Our initial impression faded, and it seemed like the most natural thing in the world.  We waved back.  Their good mood was infectious.

Once they'd passed, we got back on our bikes and booted it for all we were worth.  As much fun as it might have been, the idea of sharing the next 23 km. with a floating Oompah band was not one either of us much relished.
Posted by Lynn at 11:19