Revisiting the bones of the earth through the sea. 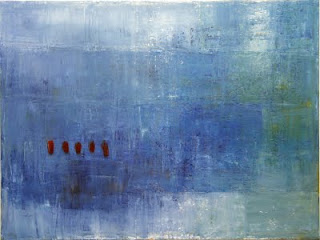 (oil on canvas)
Seascapes - with their ever changing colours, and the interplay of sea and sky - have been a source of inspiration for my painting over the past few months. 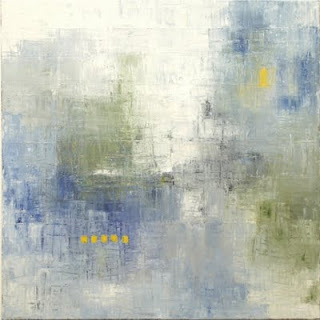 (oil on canvas)
After my return from a week away at the English North Sea village of Robin Hood’s Bay a few weeks ago, I was expecting the experience of that seascape to drive my work further in that direction.  Instead, I’ve returned to a series which I began last year, but abandoned when I wasn’t satisfied with the way it was evolving.  This series was inspired by a trip to pretty much the diagonally-opposite end of England: inland Dartmoor.
I've long been attracted to Dartmoor both for it's impressive landscape and for its stories and legends.  The idea of the landscape shaping the stories which grow out of it is one I find endlessly fascinating.
This return to a previous - and stuck - series came as a surprise.  There is a mysterious element to the creative process.  Certainly creative developments happen as we paint and as we think about our painting; but others happen when we aren’t and don’t.  This sub-conscious level of ferment is interesting because it doesn’t follow rules of logic and intent, and it can’t be forced.  Why is it that after a trip to the coast, where I was confronted with the perpetual rhythm and noise and awareness of the sea, did I instantly go back to a series which grew from a landscape profoundly still and solid?  Perhaps it’s that we experience things in part by contrast: I was forced to think more about my experience of the inland heart of Dartmoor in light of its foil; the sea. 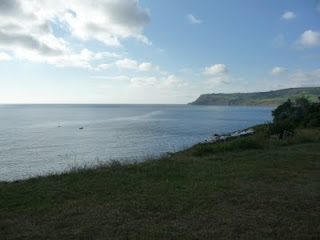 (Robin Hood's Bay)
The Dartmoor landscape appeals to something very deep in me.  On my walks around that region, every time I sat on the granite outcrops, I was strongly aware of the presence of the land.  The clouds tumbled overhead, sometimes as dark and heavy as boulders, sometimes as thin and white as winter breath, while the land itself was still.  Profoundly so.  I was aware of a deep, waiting stillness.  But there was also the awareness of the long, slow violence of nature: the exposed rocky tors where wind and rain and sleet and snow had forever been lashing against the hills, exposing and shaping the granite masses.  An interplay on the edges, at the boarders, between the elements of that landscape. 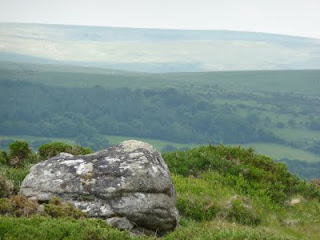 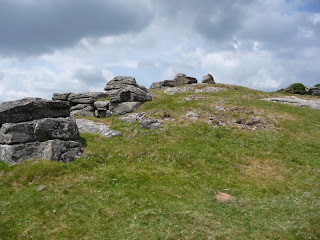 (Dartmoor)
Returning to this Dartmoor series, I have a clearer idea of how to assimilate the two predominant themes I’d been exploring: that of the overwhelming landscape of that region; and that of the magic of storytelling.  The trouble I was having was incorporating the latter.
In some of my collages, I include writing: the first lines of stories usually.  With my abstract paintings, I don't want to illustrate or tell a story directly, but I want - in this Dartmoor series - to play with the idea of “story” and of the expressing that through visual symbols. 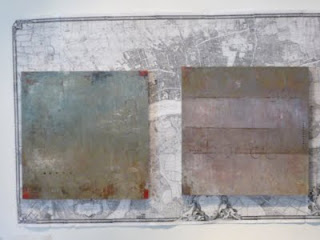 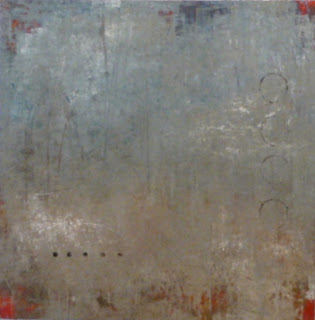 (oil and cold wax on wood: work in progress) 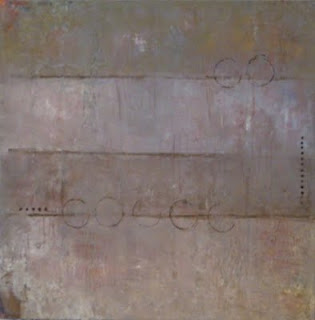 (oil and cold wax on wood: work in progress)
I’ve tried to suggest this with symbols and marks similar to the earliest markings made by humans:  ochre markings on a cave wall; scratches on stone; the rhythm of mark making - the physical act which is similar in many ways to the force of nature marking the landscape. 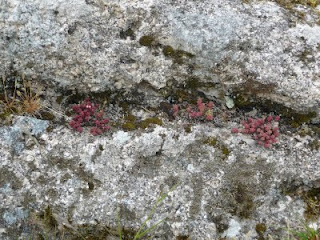 Rebecca Crowell is an artist whom I admire both for her beautiful work, and for her openness and generosity in discussing her creative process.  She posted a blog as I was preparing this one, on a very related topic: gestural marks on paintings.  She often includes scratched or applied lines, which sometimes look almost like writing, in her paintings.
She mentions the recent death of American artist Cy Twombly and his forays into exploration of mark and gesture in non-representational painting, and I must say that I also found myself pondering this topic in light of his death.
Cy Twombly was a man who stubbornly followed his own artistic vision with integrity.  Apparently he spent decades living practically as a recluse in Italy, spending most of his time reading.  He would have bursts of creativity in which he would paint obsessively.  The fact that he was such a voracious reader makes sense in light of the gestural marks which he worked with throughout his career.  I won’t say any more about the man, as I’m afraid that’s about all I’ve heard.  I will be on the lookout for a good biography now though.
Marks, lines, symbols.  Looking at the many writing systems which exist, or have existed, as a mine of human gestural symbols, is instructive for me.  Artists develop their own visual vocabulary, and this often includes symbols and markings.
And, just as the elements of art (line, shape, space, value, colour, texture, and form) can be explored in-and-of themselves, so can the elements of writing.  In rather the same way as a song needn’t have words to be sung (if that makes any sort of sense).  It’s exciting - as a viewer - to sense the human hand, arm, body, mind, behind the creation of specific marks.
This is a relatively recent development for me, one which I’ve just in the past year begun to think about and experiment with. Thinking about Cy Twombly and his work has urged me to write a post about it.
This has all been written before and far more succinctly than here.  Sometimes it can help to put ideas down in writing.  Sometimes it kills them, pinning them down like butterflies.
And at times, the elements of the written word can be the idea itself.  I’m not sure where it will lead, but I’m enjoying the process.
Posted by Lynn at 00:54