A Tuesday Walk with Swans and Templars. 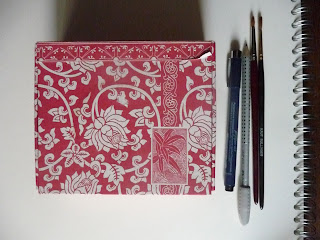 I'm not one for New Year Resolutions.

After too many years of writing lists of resolutions that were too suspiciously similar, it finally twigged that maybe it wasn't working for me.  So, instead, I think about things I'd like to try to do (or not to do, as the case may be) in the upcoming year.  More tendencies, than resolutions.  Not nearly as intimidating.

Three of the things I've been wanting to do this year are:

- get out of the flat more.  (When I'm in a writing or painting frenzy, I've been known not to step foot out of the front door of our small flat for days on end.  Washing my hair happens less frequently and I start to talk to myself.  Not good.)

- go for regular walks in nature.  (Though I live in a city, I live at the southern edge of it, a ten minute walk away from forest and river.  Getting out into nature helps to clear out the cobwebs, and leaves me feeling creatively re-charged. My husband also mentioned that it puts me in a better mood.  My boys nodded vehemently and tripped over each other in a dash to open the front door for me.)

- improve my drawing skills. (I love to draw - always have.  There is a wonderful trance-like state which drawing induces in which time slips by and I come out of it feeling relaxed and strangely energized.  I have only haphazardly worked at honing drawing skills over the years, and now want to really improve.)

The idea is to combine all three and once a week go for a long walk down by the river and through the forest, bring back a few items, and sketch them.  I've taken inspiration from Milly at her blog Drawings from Nature.  Each week last year, she would go for a lake-side walk near her home, bring back items she found - feathers, leaves, shells - and would do a coloured-ink drawing of them.  They're gorgeous.

Last week, Monday was to be the day.

Ok, so last week the walk happened on Tuesday and the drawing not till Sunday, but it not being a Resolution, it doesn't matter. 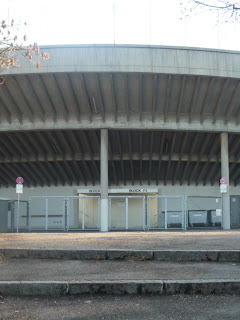 It began behind the soccer stadium.  Hmmm...not exactly nature, but funky architecture, rather like a huge ammonite.  Once down the steps, the landscape changed. 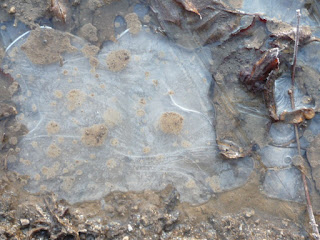 Patterns of ice and mud and leaf. 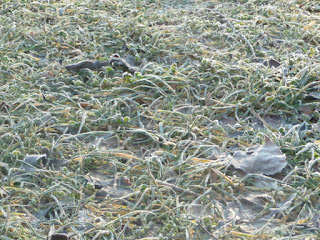 The morning grass was still frosted. 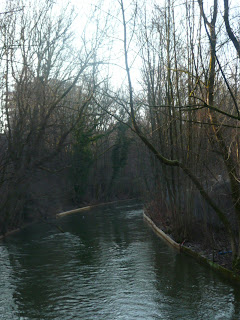 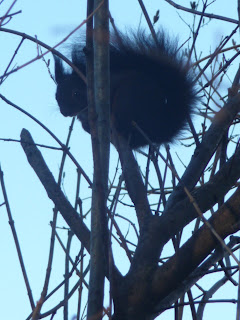 This red squirrel was balled up against the biting Winter wind. 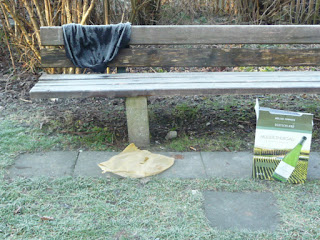 I came across one of those scenes where you just know there's a story behind it.  That's frost on the sweater. 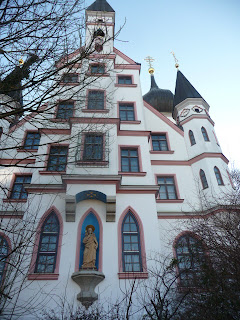 Ah! the home of the Order of the Knights Templar.  On the other side of a huge iron fence were two very big, very loud dogs.  Protecting the Grail, perhaps. 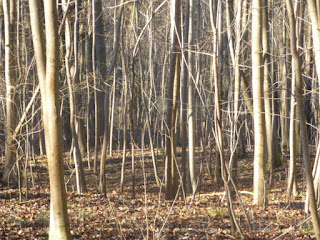 From there, I veered through a forest toward the River Isar. 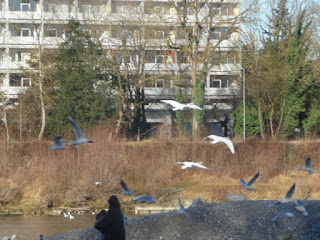 There was a sound like large sticks hitting the water with tremendous force.  It was a group of swans - accompanied by gulls - landing on the river.  I've heard that a swan's wing can break a man's arm.  I believe it. 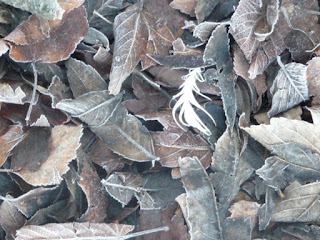 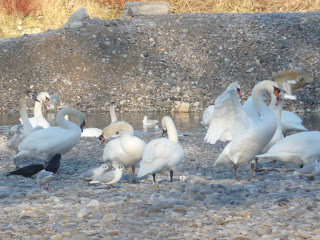 I counted 60 swans in total.  Rather, that's when I gave up.  There were a few more.  To the left is a young one, still grey and fuzzy. 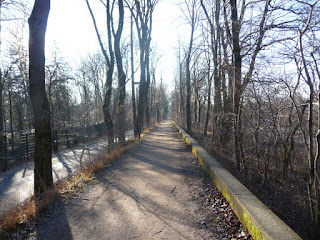 I continued walking along a path that ran parallel to the river on the right, the zoo on the left.  At one point I heard the most absurd sound which was like a man doing a very bad impression of a Formula One racing car.  The culprit: 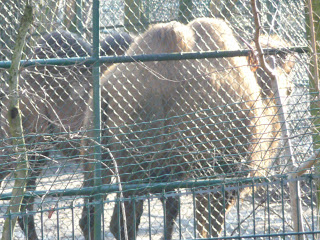 ...one of these two camels.  Or dromedaries...I've never managed to keep them straight in my head. 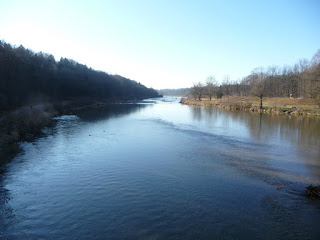 Standing on a bridge looking South.  One could follow the river back to its origin in the Alps.  With the wings of a swan, I should like to have done so. 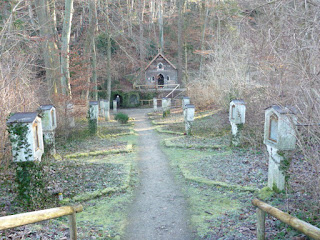 Stations of the cross. 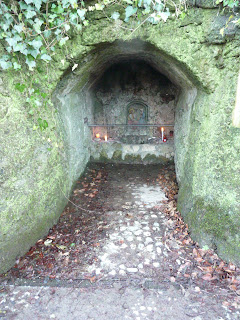 A nineteenth century grotto built around a spring which was to refresh pilgrims on the Jakobsweg - (Way of St. James).   There is now a large sign warning not to drink the water. 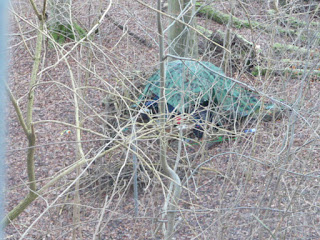 As I climbed a steep hill out of the river valley, I looked down to see a makeshift home in the now exposed woods.  Whenever I see something like this I always wonder, and am filled with a strange melancholy.  The romantic in me likes to think that the person or people who inhabited the hut did so voluntarily.  A small settlement in the woods on the edge. 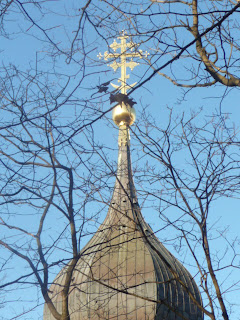 The Templars again, this time from above. 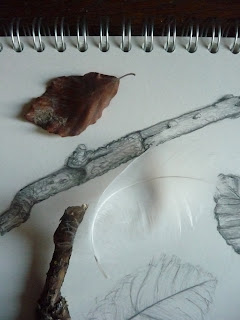 I returned with a twig, a leaf, and a swan's feather.  On Sunday afternoon, I finally got around to drawing them.  (Don't worry, I won't be posting each sketch.  These are rough exercises.)

The lovely thing about sketching in this way, is that it allows me not to be preoccupied with the finished drawing: not to get frustrated because it's not as good as I wish it were; not to feel that it's pointless because it will never be as good as someone else's.  It's the process which is important; not the outcome. 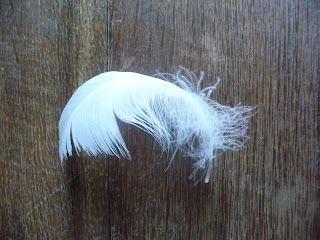