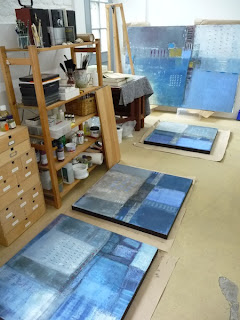 (paintings with edges drying. the big one hangs vertically)

I'm sometimes asked how I know when one of my paintings is finished.  Perhaps it's the nature of non-representational painting (or perhaps painters who paint representational works have this issue as well) but it can be difficult sometimes to know when a painting is "done".

Sometimes with a piece, I know the instant it's finished.  This glorious moment can come after a while of struggling, and I'll suddenly be facing what was a moment earlier, an adversary, who has now revealed itself to be a good friend who was just having me on; or it can come after a slow and smooth evolution and the piece slips comfortably into completion.

Then there are those pieces which refuse to congeal.  I work and I work and I apply layer after layer of paint; I scrape, scratch, mould, but it refuses to cooperate.  With these, I usually have to make them stand in the corner for a while.  When I return, with fresh eyes, it's often obvious what needs to be done to bring it closer to finished.

On rare occasions, I'm uncertain whether a painting is finished or not.  I think it might be, but something holds me back from saying "yes".  With these paintings, I leave them for a while, but keep them in my view. Sometimes it's a very simple thing which needs to be added, a dash of colour, a line or two.  Other times, the painting is actually finished, but I just needed a bit of time for something in me to catch up to it.

The absolute "this painting is done, there's no turning back now" moment for me is when I paint the edges.  I paint on double depth stretched canvas frames (4 - 5 cm.) and I paint the edges black (usually) so there's no need for traditional framing.

That's what I've been doing the past few days in anticipation of a one-day show which I'm participating in, along with another artist, at an Architect's office on Friday.  Yesterday I put the final coat of acrylic paint on the edges.  That's always a good feeling.  A very good feeling.

Most of the paintings in these photos are from my newest series.  I've completed six, and am part way through another one (it's leaning against the wall in the bottom photo).  I'm looking forward to pursuing this new direction.

The process of painting is so much one of discovering.  And I love the way that an element which appears in one painting, can lead to, and open up a whole new direction of exploration.  Like secret gates, doorways, opening up to hidden paths.

It's those moments of discovery, when you experience that wonderful tingle of excitement, which makes all the struggles worthwhile.  Something all creative folk recognize.  That feeling which tells you that you are on the right path, you are connecting with something, that you are communicating something, something that comes from within, but something deeper than yourself.  It's that wonderful dichotomy of having to dig deep within the individual in order to touch the universal.  The quest of all artists, whatever their medium.  The reason we create. 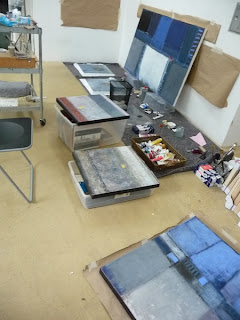 (the one against the wall is not complete)