London with the Pre-Raphaelites

I find myself once again in London; this enchanting, confounding, enigmatic chimera of a city which long ago won my heart.  It's a city of multiple exposures: layers of time that can be sensed around every mass of concrete and brick, along every twist of pavement and cobble-stoned street.  Being in London is rather like being in a time machine on the blink; with pieces of yourself deposited in different periods at once.

This time, a large part of me has been firmly plonked down in the Victorian period.

There is an exhibit currently running at the Tate Britain: "Pre-Raphaelites: Victorian Avant-Garde".  Below is the cover of my copy of the catalogue. 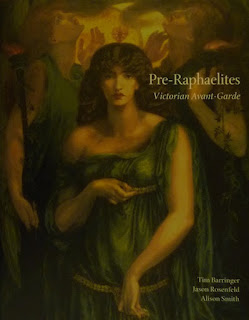 The exhibit was mainly made up of paintings, but there were also textiles, tapestries, a stunning knotted rug, books from William Morris' Kelmscott Press including a drool-worthy edition of "The Works of Geoffrey Chaucer,"examples of stained glass, a clavichord, a few samples of furniture, and Morris'  lovely seventeenth century four poster bed with a spread, curtains, and pelmet (similar to a valance hung round the top of the bed) all of which were designed and embroidered by May Morris, William's daughter who had her father's genius for both design and execution of beautiful decorative work.

It is inspiring what the Pre-Raphaelites set out to do and actually accomplished.  Walking through the exhibit, thinking about how they rejected the soul and beauty destroying industrial revolution, it was impossible not to think of our own times, and of the many banksters, Conservative politicians, and their ilk running about on the streets and in buildings and office towers not far away. 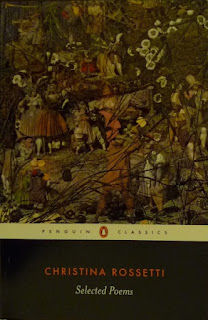 As a tonic to such thoughts, I also bought a copy of the Penguin's "Christina Rossetti: Selected Poems" from the gallery shop.  I'm sure I have many of these poems in other anthologies, but it is nice to have them in a book of their own.

Later on my wanderings down Charing Cross Road, known for its second hand book shops, I stumbled upon a delightful shop selling antiquarian books, maps, prints, and documents called "Notions Antiquaria."  It's run by Tracey Brett, daughter of the man who established it in the 1970's.  It's a charming shop that transported me to times past.  I was taken by an Arthur Rackham engraving from an early edition of Peter Pan, which is now tucked away in my suitcase.  It's titled "Looking very undancy indeed." 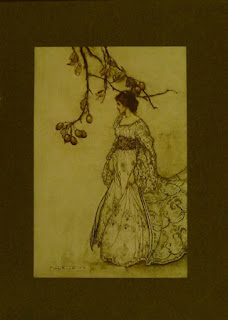 Tomorrow I head home.  Which I'm always glad about.  It's nice to have some mementoes of London - past and present - going with me.  As well as thoughts inspired by what I saw, and the reminder that - in spite of how it often seems - the power of beauty and wonder are enduring and can shape so much of the world around us.
Posted by Lynn at 12:36 10 comments:

season and palette in the room of november dreams

The other day, I curated my first Etsy Treasury.
Here it is (though I can't get the formatting quite right, I'm afraid, and this post is reading all wonky.)


For those who aren't familiar with this - as I wasn't until very recently - it's when an Etsy user chooses up to 16 images of works for sale by other sellers and puts them together in a pictorial mosaic; usually under a theme.

I wandered through some of my favourite Etsy shops and picked items that caught my eye. Soon, a theme emerged.  Once it was all together, I gave it the title "in the room of november dreams."

When I got back to my own Etsy offerings, I was shocked by how different from these the colours in my recent collages are.

Pieces have a way of creating themselves.  And the ones I created in the past two months - when the trees outside were blazing with warm colour under an intensely blue sky - reflect that time.

But now, in November's muted mood, I feel my palette being affected once again. 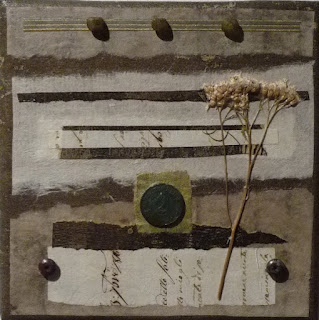 Much more of a sober November feel.

It's fascinating to see how season can affect one's art.

(For those who read the earlier version of this post, no I wasn't referring to my skid when I mentioned my pallet, I'm just one of the world's worst spellers!  Foiled by spellcheck and English homophones once again!)