Coming home with my hands full the other day, I put down my items on any clear space I could find in my painting room.  I liked the way the snakeshead fritillary looked against the painting I'm currently working on so decided to take a snap.  Makes me wish I was a botanical painter!

I'm putting together a new series of paintings for a show I have in July.  It's based on Norse Myth and I began with a small group of paintings titled Élivágar which I mentioned in an earlier blog post.  The painting pictured here, is one is one of a pair inspired by Niflheim, the Land of Mist in the north; counter to Muspelheim, Land of Fire in the south. 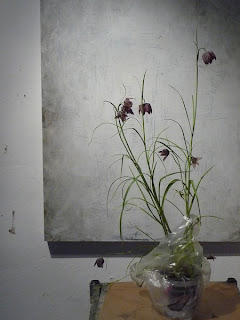 My current show is running in a Ministry building here in Munich until the beginning of May.  It's a mix of pieces from three series, as well as some odds and sods.  I've sold one piece so far, which I'm very happy about not least of which because It's one of my largest ones and at 150 x 180 cm I was worried about where to put it after the show.  (Losing my studio also meant losing the place to store my paintings.)

And, my latest collage: "Her father taught her to know the fairies by name." 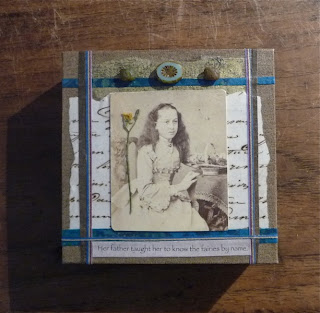 For a while now I've been thinking about painting watercolour images of women and girls and adding papers and old letters and a line of text like I do in my collages.  I've only just begun to experiment, but once I've got something finished, I'll post some pictures.

Blodeuwedd: Issue 23 of Niteblade: Fantasy and Horror Magazine is up! 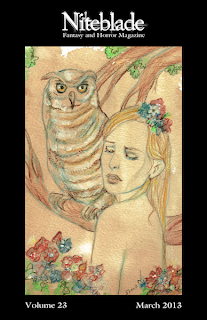 Many thanks to Rhonda Parrish founder of the magazine, and to Alexa Seidel poetry editor for including my piece in this issue!
Posted by Lynn at 10:50 No comments: