Fox prints at the edge of the forest.

This is a slightly tidied up version of the tidiest part of my desk right now.
A reflection of the recent state of its owner. 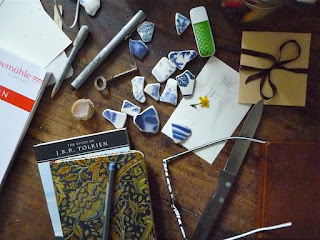 The past few months have been a bit like being lost in the Depths of the Forest, but light is filtering through the thinning trees at its edges.  A path is emerging.  Some big changes ahead.  Some new possibilities.  I’ll be writing more about them as they approach.  Or rather, as I approach them.
At the New Moon, once I'd started to see my own forest path, a charming gray fox happened across it.

I’ve been reading Sylvia Linsteadt’s blog The Indigo Vat for a while now, enjoying her image-and-word stories about the wilds of Northern California she shares with foxes, bobcats, jackrabbits, coyotes.  Her stories weave a beautiful, soul-deep magic binding old tales; the wilderness of her home; and the wilderness deep within each of us.

Recently, she has been offering monthly retellings of old tales through her “Gray Fox Epistle” series.  I received her tale for May: a re-telling of the Scottish tale Tamlin.  Everything about it is enchanting.  You can read about the creation of each of her tales at her Gray Fox Epistle blog. 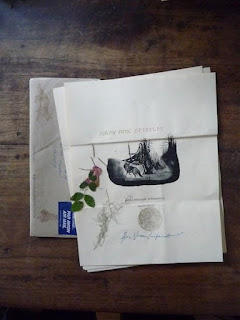 One exciting thing on the horizon, which I’ll write more about soon, is singing at a Jane Austen Ball in a nineteenth century ballroom in Regensburg.  Now I just have to dust off my voice and lock up my nerves in a small box somewhere...

And, because I love including photos, a picture of my own grey fox.
My lap appears to have shrunk in these past few months. 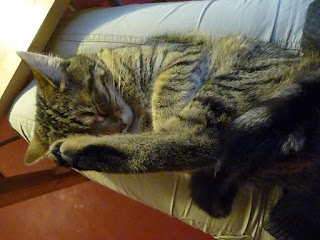 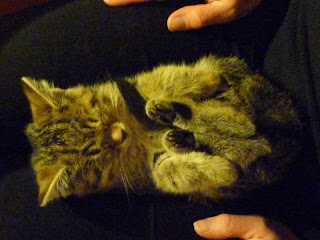