I don't know how deeply linked creativity is to the seasons, but I found that during the first few months of this year, with its Narnia-like ever-Winter, creating was difficult.  No Spring, coupled with some side-swiping health issues, as well as a general feeling of stagnation left me with little creative energy.


Now that the seasons have finally tipped, Persephone didn't abandon us for good, everything has been exploding from bud to leaf to flower in an almost time-lapse frenzy. 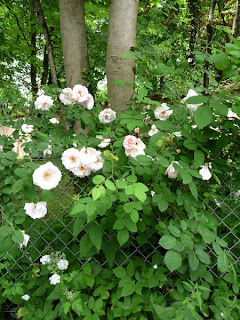 That movement, the pulling of sap, drawing of creative forces has me stirring again.

It's not that I haven't been creating during these past few months, I have been, but it's been laboured, a bit of a fight.  I haven't felt in a creative flow in spite of having found, once again, a lovely studio to work in - with a beautiful view to an overgrown garden. 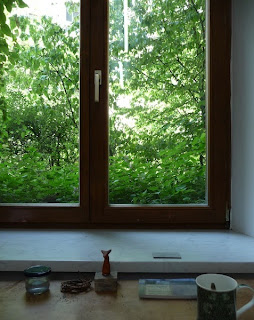 Next Monday I hang for another show in Munich - my last one while still a resident of the city.  It's in Ruffini, a cafe-restaurant which showcases art from a different artist each month.  I'm very grateful for the opportunity to display my paintings there.

Initially, I had thought I was going to carry on with abstract paintings based on Norse Myth which I mentioned in an earlier post, but my "House of Memory" series decided that it was 'not dead yet' so I have been working on completing a few more of them for the show.  I must go into the studio later today to put on the last touches and then over the next couple of days to paint the edges of the canvases. 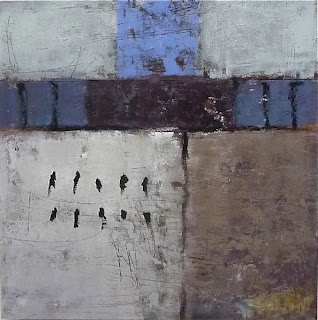 For the past three weeks, I've also been busying myself with a German class.

When we first arrived here five years ago, I enrolled in a class.  Since then, I've had opportunities to practice and improve my German in the course of day to day activities.  But, given that my work is by nature largely solitary, and that I'm a very shy person, it's been perhaps been more difficult for me to pick up the language than for others who would either be forced to in their work place or through a gregarious personality.  So, I'm now past the half way mark in a five day a week, three hours a day class.

A bonus is the walk or cycle from my studio to class. 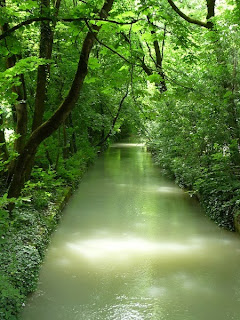 My route takes me through the Alter Südfriedhof - the Old South Cemetery.  I've written bout it before when I first visited it a couple of years ago. 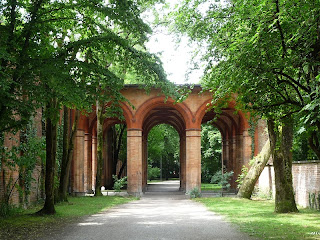 Here's the gateway.  The brickwork is amazing.  There isn't much red brick building in Munich, and I don't know why: perhaps there wasn't the right clay, or perhaps it was just preference and tradition.  I for one am a sucker for red brick.  I know it's an ages old building material, found all over, but for me there's still something quintessentially Victorian about it.  Perhaps it's that in Toronto, where I grew up, the city is full of red brick Victorian homes.  An architectural style I really miss here in Bavaria, so this is always a treat. 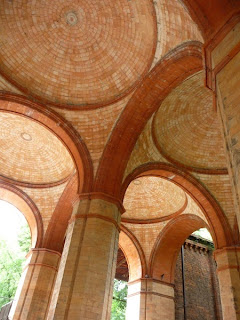 The cemetery itself is beautiful.  It's possibly the oldest in Munich and is now under protection against development.  One of the things which I love about it is that they let it run wild.  Here you have a sense of time, and of Nature eroding and reclaiming, roots slowly pushing over stones in a strange sinewy dance.  And ferns.  Lots and lots of ferns. 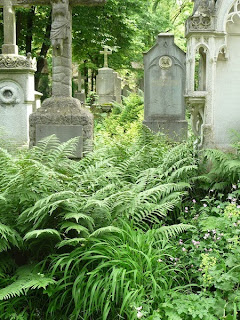 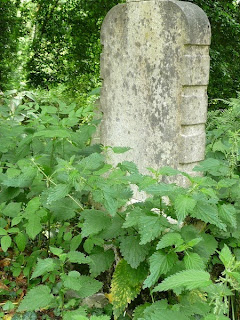 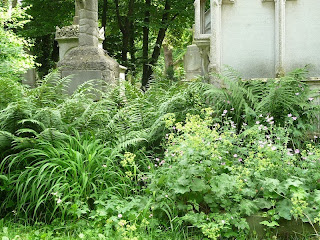 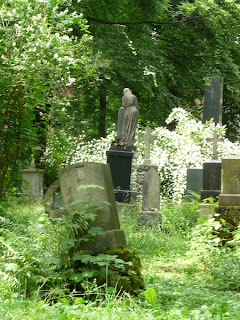 Last week, as I was walking through, I found this stone.  Rather uncharacteristically, it has a woman's photo on it.  The writing is, unfortunately, long gone, but her photo remains.  She reminded me of the women in my collages. 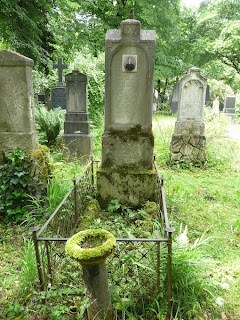 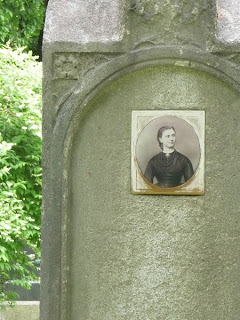 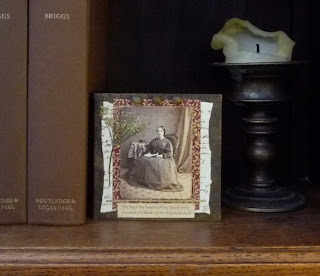 In the garden over her grave was a wild strawberry plant with a few bright red berries.  Like drops of blood, or tiny hearts.  There was magic there.  And perhaps a story to be told. 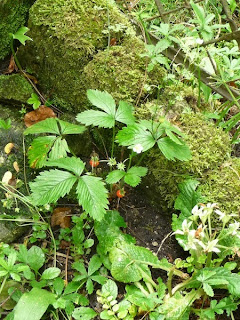 On the topic of stories, I wanted to share a collection of stories, poems, essays, and art which I've been thoroughly enjoying.  Donna Quattrone and Virginia M. Mohlere have edited this Scheherezade's Bequest publication: "As You Wish: the Loathly Lady Issue" (volume one, issue one).
It's beautiful.  The picture on the cover is one of Rima Staines'  (I'm sorry about the poor quality of my photo, I wasn't able to take a better one, but those of you who know Rima's work can imagine how gorgeous it is in person.) 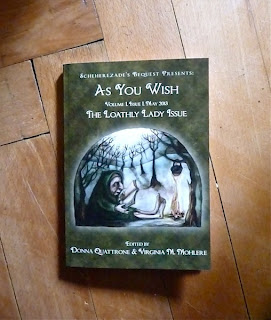 I did mention that my show this month is to be my last as a resident of Munich.  In the middle of August, we're moving to the beautiful mediaeval city of Regensburg.  We'll be living on the forth (fifth) storey of a building which was begun in 1250 and is right in the middle of the Old Town at Haidplatz.

The building complex, called the Goldenes Kreuz, is huge and includes, along with a few apartments, a cafe, a small hotel, and a nineteenth century ballroom.  And it's the ballroom along with Jane Austen that got this whole move happening in the first place.

My husband has taken on the task, from his cousin in Regensburg, to help create a Jane Austen Regency Ball in the ballroom in November.  He's been busy organizing the music, trying to keep to pieces which were in Austen's own collection, as well as finding the dances to go with them.  There will be musicians and I am very happy to participate by singing a few songs.

One thing led to another and we realized that there seemed to be more opportunities for us professionally in Regensburg.  When at the same time an apartment became available for this Summer, it was a sign.  And we've decided to follow it.  Thank you, Jane. 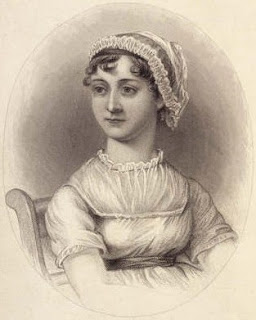 So.  A long, rambling post about what's been going on and what will be going on now that Summer is in full swing.