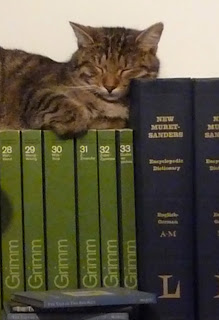 The Brothers Grimm, Jacob (1785–1863) and Wilhelm (1786–1859), so well known for collecting folk and fairy tales, also wrote the definitive German dictionary - those green books that Molly is using as a bed.  The undertaking was so ambitious that it was only completed in 1961, many years after their deaths.  Alas, my German is not yet good enough to make use of it. 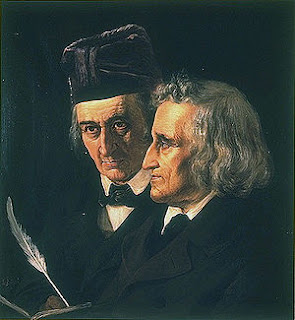 
Nice as that dictionary is, what I really, really covet is a first edition of the dictionary written by Samuel Johnson (1709 - 1784): A Dictionary of the English Language, published 1755.  (Considering it would put one back a few thousand euros, pounds, or dollars, it will remain a dream.) 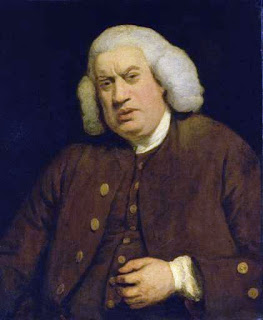 Dr. Johnson (poet, essayist, literary critic, biographer, editor, lexicographer) was possessed of a huge, restless intellect coupled with an irascible character, and subject to alarming tics (most likely caused by Tourette Syndrome), crippling bouts of depression, and numerous other physical ailments throughout his long life.  His writings are full of biting wit and keen observation.  One of the best known biographies in the English language was created by his friend James Boswell, his "Life of Samuel Johnson."