Winter and a return to Ginnungagap.

After weeks of temperatures hovering between 6 and 10˚, grey skies and rain, we finally woke up to Winter. 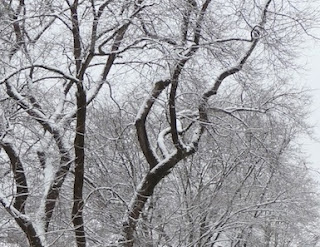 I've put up photos of my latest series of small oil and cold wax paintings on my website.

The name comes from Norse Creation Mythology and was the general name given the eleven rivers (or Storm Waves) which existed at the Beginning.  They filled the great void Ginnungagap with ice, which formed the Frost Giant: Ymir, father of all giants, from whose slain body the world was created.

The story can be found in Snorri Sturluson's "The Prose Edda", a compilation and retelling of Norse Myth put together in Iceland in the first half of the Thirteenth Century.  It occurs in the section titled "Gylfaginning" and it goes like this in my version:

"When those rivers, which are called Elivagar [Storm Waves], came so far from their source, the poisonous flow hardened like a slag of cinders running from a furnace, and became ice.  When this ice began to solidify and no longer ran, poisonous drops spewed out and froze into icy rime [hoar frost].  Then layer by layer, the ice grew within Ginnungagap."  [Snorri Sturluson: The Prose Edda, trans. Jesse L. Byock (London: Penguin Classics, 2005), 13.] 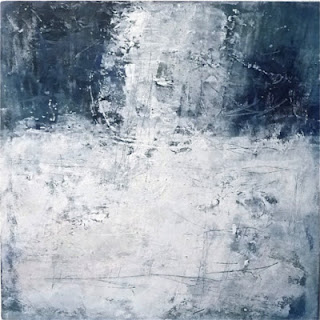 Over the next while, I'm going to continue reading and musing, sketching and painting.  There are a few other pieces on the go. The return of Winter makes it easier to delve into these stories of the frozen North.  Tales of Gods and Goddesses; of battles and trickery; Giants, Dwarves, of the time Before.  It's always fascinating, and sometimes surprising, to see how inspiration takes shape in one's work.