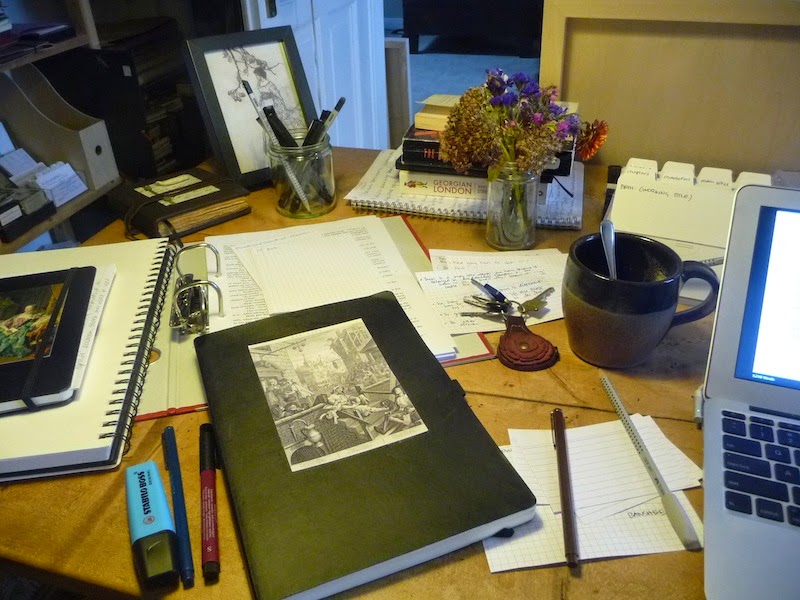 (the current state of my desk.)

I've just made a discovery about myself: I love revising long work. I've revised many short stories and poems, though I must admit to not really enjoying it. It always seems a chore. A drudgery. This is the first time I've revised a novel length work, due to the fact that it's only the third time that I've actually finished the first draft of a novel, and that this is the first time one's been worthy of revising.
On my shelf, along with the two crappy first drafts, there are also numerous false starts, most of them dead-ending around the 45,000 word mark. At that jinxed spot, I would either run into serious doubts about the story and decide to put it away for a bit; or I'd get really, really excited about a new idea and start the story all over again; or I would simply have run into too many plot-holes, get frustrated, and give up entirely.

"Write, and finish what you start to write." This has been ringing in my ears lately, coming from the mouths / pens of many professional writers. So, a few months ago, I took the very, very rough outline of a story I wanted to tell and I wrote the first draft. The whole blasted thing.
Then I put it away. Since that's also what published writers tell you to do. I wasn't sure how long to leave it there, but when I realized that I was actually dreading revising it and avoiding it for that reason, I knew it was time to bring it out. 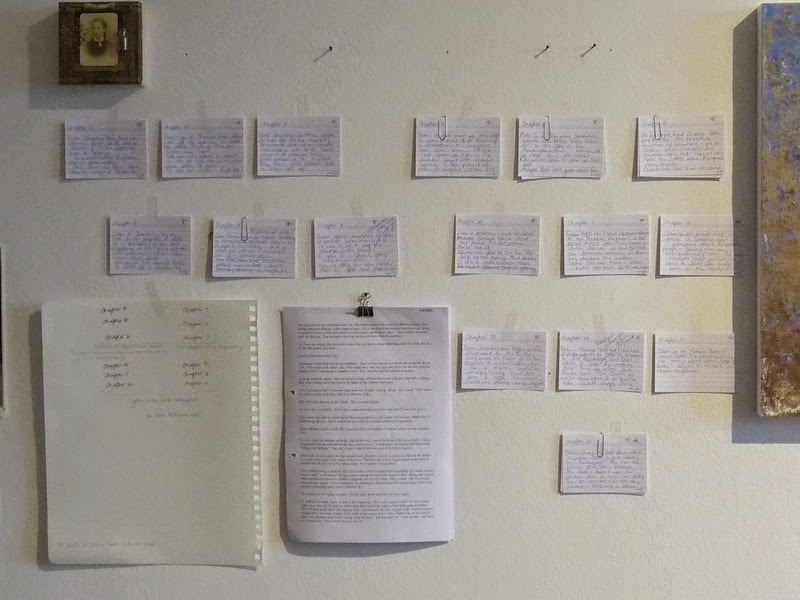 (I'm having to use part of my painting wall for the revision process.)

And now, I'm knee deep in the process of revising, and - to my surprise - I'm loving it. I'm excited about the story again. About how things are now starting to set, to become more fully formed, about how the story's internal logic is gelling. It's no longer the amorphous 'first draft'; it's becoming a coherent, revised, competent 'second draft.'
After hearing so many writers talk about how the story really starts to tell itself during the revising process, about how that's the really exciting part of writing a long work, I'm finally starting to get it. I'm sure it's not like this for all writers, but I'm certainly in the camp for whom it is the case. That might change with experience, I don't know. But for the time being, it is the way it is.
Now, having said all of that, I'm still hoping that it won't take too, too many drafts till this puppy's done.
Posted by Lynn at 03:02 12 comments: