Crows and snows and lessons of play 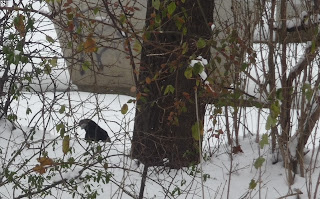 Over the past few days, the city has been blanketed - as in the blanketing of on overly protective mother of her sniffly child - in snow.  It's gorgeous.  And the crows are loving it. 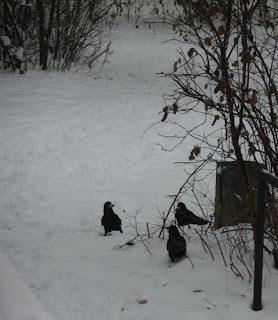 It's been most distracting.  This group of black feathered, grey beaked crows has been playing in the parkette across the street.  They dive and burrow and dance and frolic. 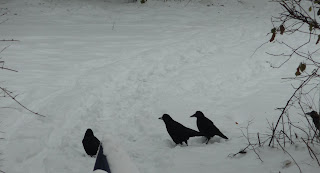 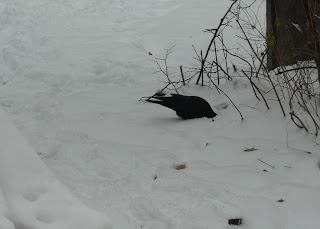 Years ago, in an issue of National Geographic, there was a photo essay on animals at play.  There were photos of a group of crows caught playing on a snowy hill.  They would walk or fly to the top, lie down on their backs, and slide down.  They did it over and over and over again.  Playing.  Not looking for food, or performing some mating ritual, they were simply playing. 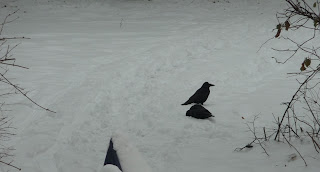 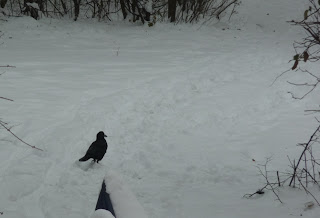 Yesterday we witnessed a solitary crow playing with a red squirrel (though I doubt the squirrel would have called it play).  The crow would swoop down on the squirrel and watch it leap to another branch then come back for another fly-by.  It was amazing to watch.  (So much so that I didn't want to leave to get my camera, hence no photographic evidence.)  Eventually the crow seemed to loose interest and crash landed in a snow drift. 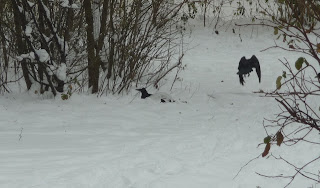 This frolicking has been distracting me from work on a (final) first draft and more collages.  There is a group show coming up next week which I'll be participating in with a couple of my abstract oils, and, perhaps in anticipation of that, I have not wanted to have anything to do with oil painting for weeks.
The subjects of these collages have been moving away from poppies to more seasonal plants: Rowan, Holly, Mistletoe.  What I like about those, apart from their form and colour, is that each is imbued with magical associations.  Later I would like to work on other such plants: Elderberry, Mandrake root, Belladonna, Hemlock, etc.  Were I of a more organized disposition, I'd even try to make the collages seasonally, when the plants were at their finest.
But for now, a Holly Christmas card 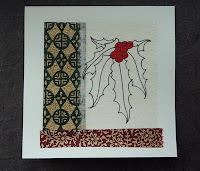 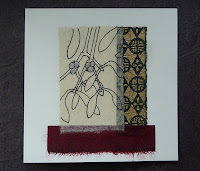 (Indian & Japanese papers with ink and acrylic 9x9 cm.)
A framed collage with a sketch of Rowan berries 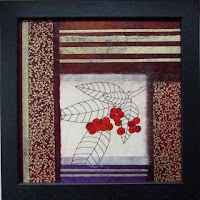 (Japanese papers with ink and acrylic, framed 19x19 cm.)
And in keeping with the theme of play, I've experimented with a fairy tale themed collage.  While not completely successful, it was a tonne of fun to work on.  I used a background of Japanese Itajime paper (which is lovely to work with.  Back in Toronto, one of my favourite stores is The Paper Place.  I've horded papers from them for years.)  I used craft paper for everything else, and fixed it to a canvas.  Since it's not easy to find inexpensive copies of English language books in Germany, I printed out "The Story of Grandmother" and used that for parts of the collage.  The rest is ink covered in acrylic medium.
As with so many things, we are often worried about the finished product and forget about process: the pure enjoyment of being in the middle of creating something, regardless of the outcome.  As I mentioned, this was not an entire success, but I had a lot of fun making it, and it has given me further ideas of things to try.  As with the crows,  it's been a very playful winter so far. 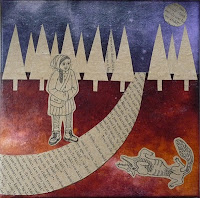